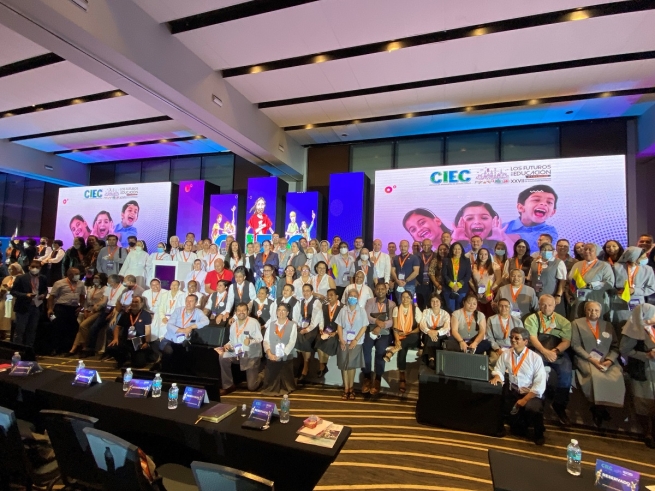 (ANS - Ciudad de México) - On May 27 and 28, a new edition, the 27th, of the Inter-American Congress of Catholic Education was held. More than 1,250 people from different countries attended the event, including about 120 members of the Salesian Family, starting with the contact persons of the Salesians of Don Bosco (SDB) and the Daughters of Mary Help of Christians (FMA) for the Salesian School in America (ESA), Fr. Claudio Cartes, SDB, and Sr. Ivone Goulart Lopes, FMA.

The congress was organized by the Inter-American Confederation of Catholic Education (CIEC) and highlighted a number of important issues, such as the prolonged crisis resulting from the Covid-19 pandemic and the multiple other "pandemics" afflicting the continent's population in the social, political, economic and cultural spheres, including the problem of difficult access to quality education.  Also recalled at the Congress were Pope Francis' words to world leaders at the United Nations Assembly in 2020: "We never emerge from a crisis just as we were. We come out either better or worse. Therefore, at this critical juncture, it is our duty to rethink the future of our common home and our common project."

The intense Congress program included 10 conferences, a debate, five TED-style lectures (Technology Entertainment Design), as well as cultural activities such as Alégrate, a tour of Mexico City's historic center, the Mexican Festival, and participation in the Catholic Education Fair.

The congress, in general, addressed the theme of the education of the future as "a space for fraternal encounter and deep reflection on the 'future of education,' in a perspective of change and innovation, represented by a new step to rethink identity and mission, to 'learn to transform' in synergy with the Global Educational Covenant." At the same time, it also addressed the themes of sustainability, fraternity, and the common good, pointing out as priorities an eco-sustainable education to meet the challenge of fraternity and care for the common home.

At the same time, it was reiterated that evangelizing by educating and educating by evangelizing will always be a challenge, even in the face of the new tasks that await the Catholic school, in the perspective of the various changes that society and the world are facing and of solidarity humanism, and also in view of the new knowledge and technologies that the Catholic School must know how to make use of to be increasingly meaningful.

During the event, the Salesian Family distinguished itself for the participation as a member of the CIEC Board of Directors, of Sister Ana Julia Suriel, FMA of the Dominican Republic, who held the conference with Mariano Jabonero, Secretary-General of the Organization of Ibero-American States, on the theme, "The Digital Agenda for Latin America: a humanized and responsible vision of technological transformation in Schools."

In addition, the "Jesús Maestro" Award, granted to individuals and institutions, was given to the Salesian Schools of Don Bosco in the Dominican Republic.

On the second day of the Congress, the Eucharistic Celebration, prepared by the Salesian Family, was presided over by Msgr. Alberto Lorenzelli, SDB, auxiliary bishop of Santiago, Chile. The choir that animated the Mass was composed of teenagers and young people from some Salesian works in Mexico City. Fr. Héctor Ugarte, SDB, said in his introduction, "What is a Catholic school? It is not the one that prepares for catechesis, but it is the one that makes it possible for every member of the Educating Community to meet Jesus Christ. This happens through pastoral activities, but also through culture and science."

In his homily, Bishop Lorenzelli underscored, "To educate is to build life, to respond to the challenges of life. The Brazilian pedagogue Paulo Freire says, 'Nobody educates anyone, we educate each other.' To build a meaningful life it is necessary to educate to be protagonists, to educate to values, to act responsibly, to peace, to hope. We must become a sign of hope with our way of living and looking at life. A seed of hope awakens in the young person when he/she perceives that they are not alone." He concluded by wishing "To educate is a matter of the heart. May the heart of each one of you always beat with joy and hope."