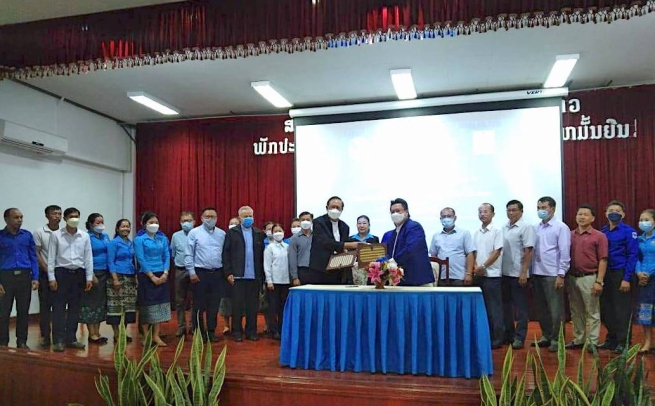 (ANS - Vientiane) - Last Thursday afternoon, June 9, 2022, at the headquarters of the Lao People's Revolutionary Youth Union, the Phase IV Agreement between the Salesian Society of Thailand Foundation and the Youth Development Department of the Lao Youth Union was officially signed. Signing the agreement were Mr. Piya Yathotoo, on behalf of the Lao Youth Union, and, on the Salesian side, Fr. John Bosco Dheparat Pitisant, Provincial of the "St. Paul" Province of Thailand (THA) - on which the Salesian presences in Laos and Cambodia also depend. The signing ceremony was also attended by Fr. Patrizio Maccioni, Rector of the "Don Bosco" Vocational Training Center, and Fr. John Paul Vu Van Trung, Economer, as Salesian representatives.

The ceremony was introduced by a speech by Fr. Dheparat, followed by that of the new Secretary General of the Lao Youth Union, Hon. Monchai Laomuasong.

"We hope that this signing ceremony of the Phase IV Agreement will continue to make Don Bosco's dream for Laos a reality," say the THA Salesians.

The Salesian Province of Thailand first signed a cooperation agreement with the Lao People's Revolutionary Youth Union in 2008. Subsequently, the agreement was renewed three times high, for the periods 2008-2009, 2010-2014 and 2016-2021.

The work of the Salesians in Laos began under the good auspices of the Help of Christians on May 24, 2004, under the leadership of Italian missionary Fr. Tito Pedron. The Spiritual Sons of Don Bosco began their work simply by repairing small vehicles: an activity that was carried out by 5 young Laotian men who had studied at the "Don Bosco Technological College" in Bangkok, Thailand.

The center currently offers courses in electricity, automotive mechanics, motorcycle repair, and welding. In this first semester of 2022, 56 boys attended - of whom 38 are students housed in the boarding school and 8 of them are Catholics.