Italy – Rector Major in veneration of the Heart of St. Francis de Sales 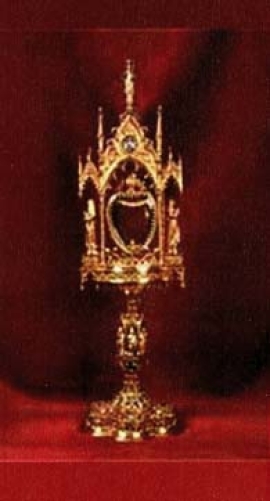 (ANS - Moncalieri) - On the occasion of the 400th anniversary of the death of St. Francis de Sales (1622-2022), the Federation of the Visitation Italy North - belonging to the Order of the Visitation of Holy Mary, a religious institute of Pontifical Right founded by St. Francis de Sales and St. Jeanne Frances de Chantal - has promoted a pilgrimage of the relic of the heart of the Savoyard saint to the monasteries of the Federation. It is thanks to this significant initiative that next June 17 Fr. Ángel Fernández Artime, Rector Major of the Salesian Congregation, together with some members of its Council, will have the opportunity to concelebrate a Eucharist in honor of the patron saint of the Salesians and to venerate his relic at the Visitation monastery in Moncalieri, not far from Turin.

The relic of St. Francis de Sales, Bishop of Geneva, kept in a precious reliquary, will stop in Moncalieri for two days, coming from Pinerolo. Usually housed at the Monastery of the vice-province of Treviso, it will be welcomed on the morning of Thursday 16 by Salesian Fr. Gianni Ghiglione, biographer of St. Francis de Sales; at 6 p.m. Fr. Michele Molinar, vicar of the Special Circumscription of the Salesians of Piedmont and Val d'Aosta, will lead a reflection and prayer meeting with religious men and women in the monastery church. At 8:30 p.m. Msgr. Cesare Nosiglia, archbishop emeritus of Turin, will preside at Mass.

The following day, June 17, from 9 to 11:30 a.m. the monastery church will remain open for the veneration of the relic; then, in the evening, at 8:30 p.m. the Rector Major of the Salesians, Fr.  Artime, will preside over the concelebration of the Eucharist in memory of Don Bosco's choice to place his children under the protection of St. Francis de Sales. In the early hours of Saturday 18, after a concluding Mass on this leg of the pilgrimage, the relic will continue its journey to the monastery of Genoa-Quinto, the last stop before returning to Treviso.

“It was December 28, 1622, when Francis de Sales died in Lyon,” Sr. Mariagrazia Franceschini, of the Order of the Visitation of Holy Mary (the so-called Visitandine nuns), a scholar of the spirituality of the founder. “Shortly before, in the parlor of the monastery, greeting the nuns, he had said to them, 'I take you all into my heart and leave it to you as a pledge of my friendship.' These words were taken literally at the time of the post-death operations that followed to embalm the body: the heart (with other organs, according to the custom of the time), was extracted and brought with all respect to the Visitation, which from that moment on kept it as the most cherished treasure. For more than a century at the end of January, the relic was solemnly displayed for public veneration in the monastery church and attracted large crowds, especially because of the miracles that occurred at its contact. The most famous: that of the healing of Louis XIII, king of France, who in gratitude donated a precious gold reliquary for the safekeeping of the heart that remained uncorrupted.”

Then came the years of the French Revolution and the nuns went into exile to escape persecution and save the relic for which they felt responsible for the whole Order. It was kept in Mantua, then several stops in the Tyrol area and also in Bohemia, then, in 1801, Venice, where the relic remained until 1913, before reaching Treviso, a location indicated by Pope Pius X, who personally spent himself in locating a new home since, as Patriarch of Venice, he had developed a deep devotion to St. Francis de Sales.