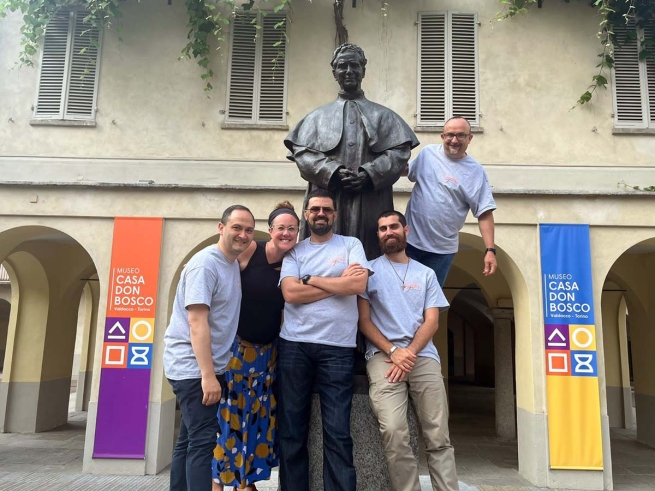 (ANS - Turin) - The Salesian Missionary Volunteering (SMV) Advisory Board met in Valdocco from May 31 to June 9 to draw up the first strategic plan to promote SMV in the Salesian Congregation.

The Salesian charism is one only and, following the wings of the Spirit, is embodied in every context, respecting and enriching it. A privileged expression of this dynamism is missionary volunteerism, that is, when a young person decides to spend time of his or her life in a place other than his home by putting himself at the service of a Salesian work, guided by the community that welcomes him and prepared by a specific training course before departure.

Following Don Bosco's example, the Salesians have always cherished such experiences and continue to promote them throughout the Salesian world. Following the publication of the handbook "Volunteering in the Salesian Mission" in 2019, some lay volunteer coordinators in their Provinces began to gather periodically to share the challenges and joys of their work, and gradually the Sectors for Missions and Salesian Youth Ministry joined forces to initiate a broader reflection on Salesian missionary volunteerism. Thus the SMV Advisory Board was born: a very fine example of a shared mission between lay and consecrated people and full collaboration between Youth Ministry and Mission Animation.

After two years of online meetings, with flexible schedules due to time zones (6 a.m. in Australia, 10 p.m. in Italy...), the Advisory Board met for the first time in presence in Valdocco, from May 31 to June 9. Ten days of very intense work, out of which came the Strategic Plan draft for the coming years to strengthen SMV at the congregational level. Four areas were identified after discussion with the provinces, through two surveys and several personal interviews, and after reflection by the team: collaboration and networking, formation, accompaniment, and development. For each of these areas, several objectives were identified, with activities to be put into practice counting on the help of many different actors in the Salesian world.

The work was accompanied by the two Councilors for Youth Ministry, Fr. Miguel Ángel García Morcuende, and for Missions, Fr. Alfred Maravilla, in line with the planning of the Sectors, in which there are several indications of volunteerism.

Furthermore, the reflection was broadened by sharing with all the Regional Councilors, who expressed their vision of SMV within the countries belonging to each of the 7 Regions of the Salesian Congregation, and by a discussion with the Sector Team for Formation.

"May this work bear fertile fruit for the benefit of so many young people and Salesian communities around the world!" is the wish of the members of the SMV Advisory Board after this intense period of engagement.