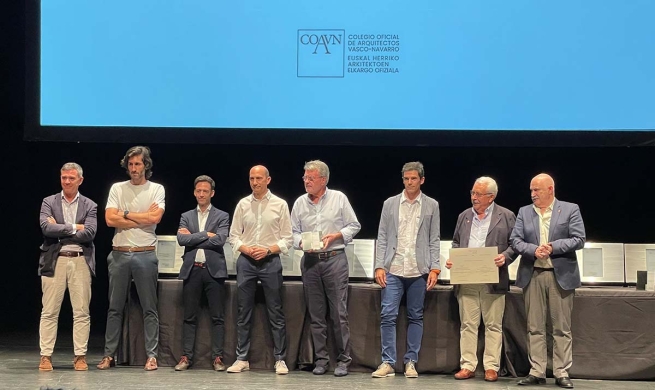 (ANS - Pamplona) - The Salesian School and Vocational Training Center complex in Pamplona, in its new location in Sarriguren-Valle de Egües, has been recognized as a valuable architectural work by the Official College of Architects of the Basque Country and Navarre (COAVN, in Spanish), which deemed it the winner of the Prize it awards in the "Public and Technological Buildings" section. For this, last June 14, in the "Baluarte" Auditorium in Pamplona, architects Álvaro Cordero, Carlos Garmendia, Daniel Azpilicueta, Imanol Carlos García de Albéniz, Iñaki Tanco, and Pedro Garmendía, who designed and built the work, were honored by the COAVN, together with Fr. Jorge Lanchas, as a representative of the sponsoring institution, the Salesians of Don Bosco.

The Salesian complex in Pamplona near Sarriguren-Valle de Egües was opened in 2019 and inaugurated in 2020, in the presence of the Rector Major, Fr. Ángel Fernández Artime. It went to renew the Salesian presence in the city, which opened in 1927 and was previously located in the city center but was no longer adequate mainly due to the lack of space needed for the formation of young people.

The large new complex, built on the outskirts of the city, consists of four large educational buildings, an administrative residential building, and the church, to which are added spaces for the oratory-youth center and for sports activities.

As the architects who designed the work themselves explained, it is "A project that changes its scale to integrate with its surroundings, generating different spaces that enrich its own use... It is not only the spaces that count but also the voids, which inserted in those spaces and together with the vegetation go to generate a pleasant and attractive whole."

The award ceremony was held at the annual gala organized by COAVN, and presenting the award to the winners was José María Aierdi, second Vice President and Councilor for Spatial Planning, Housing, Landscape and Strategic Projects of the Government of Navarre. On the Salesian side, in addition to the aforementioned Fr. Jorge Lanchas, Director General of the Center, there was also Fr. Ángel Miranda, Rector of the work.

In justifying its decision, the jury wrote: "The principal value was given to the execution of a large-scale project in a short period of time with very interesting results. It is worth noting the appropriate use of open spaces in relation to the different uses (entrance, porch, access to the different buildings). The complex, despite its large size, has managed to achieve a pleasant insertion with the site on which it stands: located on the border 'between the countryside and the city,' the volumetric treatment greatly attenuates its landscape effect. The physical limits of the perimeter are cleverly resolved with the built structures themselves, which is equally remarkable. Finally, the architectural and educational designs are perfectly combined, which is a source of praise for the sponsoring institution."

"It is satisfying to see that one's work is recognized and appreciated by colleagues in your profession," Pedro Garmendia, one of the six award-winning architects, said on the occasion.

A video in which two other architects on the team responsible for the project - Carlos Garmendia and Iñaki Tanco - illustrate the Salesian complex is available online, as is a video on the history of the Salesian presence in Pamplona.