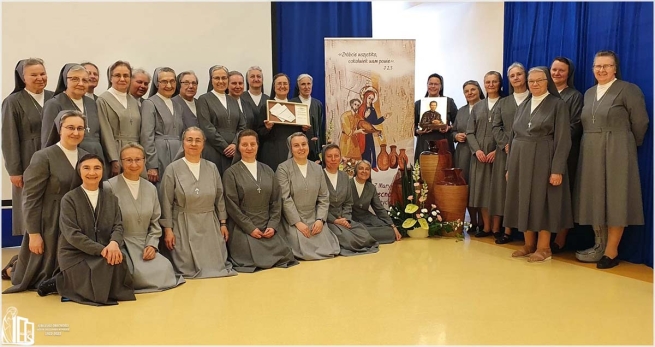 From 11 to 13 June 2022, Mother Chiara visited the PLJ Province. On 11 June, after the conclusion of the Celebrations of the 100th anniversary at the Academic Sports and Didactic Center of the University of Technology, Mother Chiara visited the FMA Community of St. John Bosco in Lodz, where she met the FMA and the children of the Family Home managed by them. In the evening, Mother reached the Provincial House in Łomianki, where she was warmly welcomed by the Animator, Sr. Barbara Biernacka, and by the FMA of the Community.

June 12, Solemnity of the Blessed Trinity, was a day full of appointments for Mother, starting with the meeting with Community Animators and with the Provincial Council in Immaculate Heart of Mary House in Łomianki, which is also one of the centers for initial formation. Sr. Iwona Szymanik, Animator of the house and Provincial Vicar, welcomed Mother on behalf of everyone. Afterwards, the Eucharist was celebrated presided by the Provincial of Warsaw (PLE) Fr. Tadeusz Jarecki, SDB, according to the intentions of Mother and the sisters of the General Council.

The meeting with the Animators and the Provincial Council was divided into two parts. Initially, with the support of a multimedia presentation, each Animator presented her community, the mission of the House, the characteristics of the works, the challenges, and joys. Subsequently, Mother spoke to the assembly on the theme, “The principle of authority as a life-giving presence.” Her intervention allowed the participants to deepen the ways to be a significant presence today, a presence that listens, that walks in synodality, outgoing and networked, rooted in the heart of God.

At the end, Mother Chiara received a relic as a gift; a preserved white handkerchief of the Venerable Mother Laura Meozzi, signed with her name.

In the evening, Mother met the Communities of St. Joseph and Immaculate Heart of Mary of Łomianki, some representatives of the Communities of St. Mary D. Mazzarello and Sacred Heart of Warsaw, and the missionaries who were guests of the Provincial House. After Vespers, the family encounter began with dinner, followed by a joyful recreation with a missionary tone, animated by Sr. Anna Czopur, a new missionary, and by the young people in formation.

At the Goodnight, Mother Chiara described Mary, the Mother of Jesus, and St. Mary Domenica Mazzarello as women who with their example teach how to be helpers and mothers. Finally, the FMA sang the hymn of Jasna Gora: “Mary, Queen of Poland, I am with you, I remember, I look”.

Mother then met the refugee mothers and children from Ukraine, to whom the Immaculate Heart of Mary Community of Łomianki gave hospitality. There are three families, eleven people in all. The meeting was very touching. The women welcomed Mother with sunflowers, the symbol of Ukraine and, thanking for the help they received from the FMA Institute, they offered a Ukrainian tablecloth and sang a song of their tradition. One of the girls recited a poem about the Ukraine.

On 13 June, after the Holy Mass with the intention for vocations for the Salesian Family, celebrated by the Director of the SDB Community of Łomianki Fr. Dariusz Sztuk, Mother Chiara Cazzuola was interviewed by a team of the Catholic editorial staff of TVP (Polish public television) who came with the Director, Fr. Maciej Makula SDB. The interview, on the main topics related to the mission of the FMA in Poland and in the world, was broadcast by Poland’s main Catholic media on June 19, 2022, and will be rebroadcast for two more weeks.

In the morning, Mother met the young women in formation, offered her words and answered their questions. For them it was a moment of mutual knowledge, dialogue, and consolidation of the journey of discernment. At the end, the young women gave her a container for the rosary made by them. After lunch, Mother and the Councilors left the Provincial House for Okęcie airport, accompanied by the Provincial, the Sisters of the Provincial Council, and the Animator of the House.

The simple and joyful presence of Mother Chiara strengthened the sense of belonging in the FMA of the PLJ Province and reinvigorated the family spirit. With her humor and her attention to each person, Mother opened hearts and rekindled the desire for commitment in the path of accompaniment of the young.