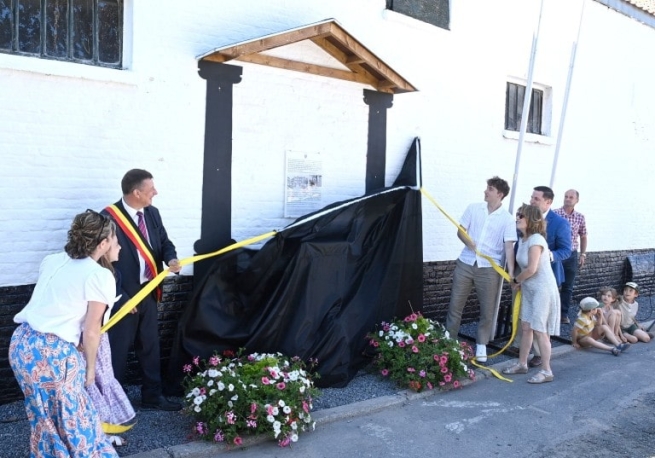 (ANS - Melles-lez-Tournai) - On Sunday, June 12, in Melles-lez-Tournai, Belgium, just a few kilometers from the border with France, a relatively unknown part of history, in which the Salesians of Don Bosco played an important role, was brought to light: two plaques were unveiled during a solemn ceremony to commemorate the rescue operation of 80 Jewish children carried out by the Salesians of the "St. Paul" Institute during World War II.

"Thank you for saving my great-grandfather, Maurice Starkman." These words, quoted by the local newspaper Nord-Eclair, which gave an account of the ceremony, were spoken by Sebastian Lewin, a young New York Jewish man who had just celebrated his Bar Mitzvah and wanted to take a trip to the places of his origins.

His great-grandfather lived in Charleroi, but when war broke out his parents entrusted him to a social worker; the latter in 1942 took him, by train, to the "St. Paul" Institute in Melles-lez-Tournai, where he was taken in and hidden from the fury of the Nazis along with dozens of other children and youths.

The Salesians had come to Melles-lez-Tournai in 1905 when they were expelled from France because of anti-congregationist laws. The community was composed of French Salesians and the students were mainly young Frenchmen, many of them from Lille, Roubaix, Tourcoing, and surrounding areas.

Young Maurice Starkman was therefore received into the school, as was Isaïe Rotblat, and then many other children. But because Maurice and Isaïe were taller than the others, they were passed off as garden helpers.

The Salesian house in Melles-lez-Tournai was closed in 1962, when the Salesians returned to France to take over the animation of the Institute of the Immaculate Conception in Bailleul, in the north of the country. Today, all that remains of what was once the St. Paul Institute is the grotto in the garden, but it has meant so much in the lives of scores of young people, and today, to the very existence of hundreds of people who would never have come into the world if the Salesians had not saved their progenitors from almost certain death.

One of the two memorial plaques was placed a few steps from the war memorial, church, and cemetery in Melles-lez-Tournai, and the second on house No. 50 on Saint Martin Street in Tournai. For his part, Paul-Olivier Delannois, the mayor of Tournai, announced that a space dedicated to the "Righteous Among the Nations" (the non-Jews who helped save Jews during the years of Nazi extermination) of Tournai and its surroundings will be created in that city in 2023.