Italy – Day of Thanksgiving to Rector Major 2022: looking to Don Bosco to go out to meet young people 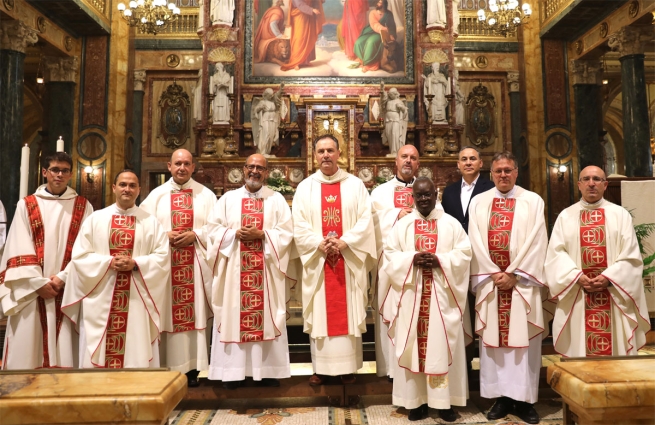 (ANS - Turin) - The Feast Day of Thanksgiving to the Rector Major by his Salesian confreres and all those who love Don Bosco was renewed once again this year, in the setting that is most proper to it: Valdocco. Originating exactly 152 years ago, on June 24, 1870, with the tribute of a coffee set to Don Bosco by Carlo Gastini and other former students of the Oratory, today the celebration constitutes a time for Salesians and members of the Salesian Family to thank Fr. Ángel Fernández Artime, who is Don Bosco's tenth Successor, for his leadership and governance of the Congregation, as well as for his service of animation and his bearing witness.

For the occasion, the Salesians of the Salesian Headquarters in Rome, together with the Salesian community of Valdocco, which is hosting the work of the General Council, have drawn up a rich program of celebrations, which began as early as last night's vespers with a percussions show in Don Bosco's courtyard.

The highlight of the celebration, certainly, however, was reached on the morning of today, June 24, with the Eucharist presided over by the Rector Major himself in the Basilica of Mary Help of Christians.

"A big thank you, for this simple, intimate moment among brothers," began the Rector Major, who then continued in his homily by recalling the history at the origin of this feast.

He then briefly narrated the central moments of Carlo Gastini's life: the loss at a young age of both parents, his arrival at the Oratory, his initial choice for the novitiate, which he later left because of his stuttering, his training in typography, and his return to the Oratory years later as Master of Bookbinding. "All of this tells us how Don Bosco came to deeply touch the hearts of so many of his boys."

Again, the Rector Major looked at the figure of St. John the Baptist, patron of Turin, and the readings proposed by the liturgy for his feast day. That is why, speaking of the forerunner of Jesus, he invited his confreres to go first toward the young people and to be for them, as Don Bosco was, witnesses of Jesus: "It is not enough to be educators or providers of social services toward young people," he said, "I just cannot imagine a Don Bosco who every day did not wish to go toward his young people to suggest a word in their ear, to invite them to Confession, to the Eucharist! He would not be Don Bosco!"

That is why he called for boldness in explicit proposal and proclamation, convinced that "more courage would bring more vocations to the Congregation and the Church."

Finally, he concluded by pointing out the need to journey all together, "as one does not walk in the Church alone; nothing is done."

After the Mass, under the coordination of Fr. Juan Carlos Pérez Godoy, Councilor for the Mediterranean Region, the ceremony of the actual tribute to the Rector Major was held in the Sangalli Hall of Valdocco, reminiscent of the one that took place in Don Bosco's time. At the opening, Br. Marco Bay, SDB, collaborator of the General Secretariat at Salesian Headquarters, presented a detailed chronicle of how the Thanksgiving Feast took place in Don Bosco's time.

Then the celebratory video "Thank You, dearest don Ángel" was shown, and the Rector Major was honored with some gifts from his Vicar, Fr. Stefano Martoglio, and the Salesian community of Valdocco.

In detail, being celebrated for their 25th priestly ordination were:

And for their 25th Salesian profession:

- Fr. Rafael Bejarano Rivera, of the Sector for Youth Ministry and reference person for Social Works;

After the tribute to all of them as well as a hymn to Don Bosco, the day's program will again include a time of fraternal agape, and in the evening, the communal recitation of Vespers; a time of spirituality with the Rosary in the Valdocco courtyard and Adoration of the Blessed Sacrament in the Basilica of Mary Help of Christians; and, in conclusion, the Salesian "Goodnight" thought that will again be offered by the Rector Major.