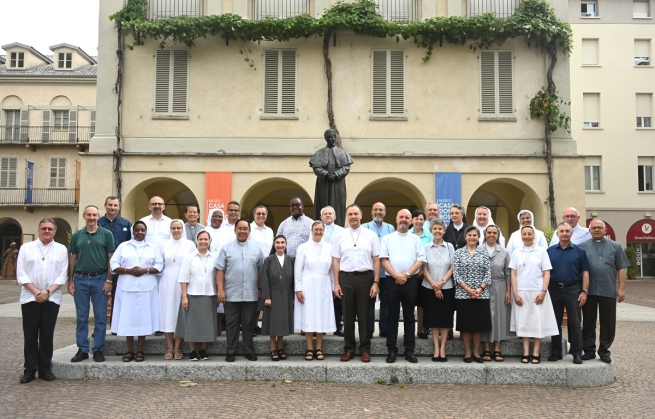 (ANS - Turin) - Yesterday afternoon, Thursday, June 23, at the Mother House of the Salesians in Turin-Valdocco, the traditional meeting of dialogue, discussion, and Salesian fraternity between the General Councils of the Salesians of Don Bosco (SDB) and the Daughters of Mary Help of Christians (FMA) was renewed. The Rector Major, Fr. Ángel Fernández Artime, flanked by the other members of his Council, warmly welcomed and hosted Mother Chiara Cazzuola, Mother General of the FMA, and her Councilors.

Coordinated by the Vicar of the Rector Major, Fr. Stefano Martoglio, the fraternal meeting began with a moment of welcoming and a group photo.

Afterward, Mother Chiara Cazzuola and the sisters of the FMA General Council illustrated the guidelines elaborated by their 24th General Chapter, held between September and October last year on the theme, ""Do whatever He tells you" (Jn. 2:5). Generative Communities of Life in the Heart of Contemporaneity."

Then, the entire group of the two SDB and FMA General Councils made a joint visit to the Casa Don Bosco House Museum. Before entering the facility, Fr Á.F. Artime briefly narrated its history, value, and significance for the entire Salesian Family and to all Don Bosco devotees, a site that cares for and enhances the Salesian historical, cultural, charismatic, and spiritual heritage. Then, guided by Fr. Enrico Lupano, one of the Salesians of Valdocco involved in welcoming pilgrims, Salesians and Daughters of Mary Help of Christians visited the various rooms.

This moment was followed by a time of shared prayer, inside the Basilica of Mary Help of Christians, with the recitation of First Vespers, led by the FMA. At the end of the prayer, the Rector Major offered the Salesian "Goodnight" thought, during which he spoke of the centrality of Christ in the lives of consecrated persons, the importance of fidelity to the charism of Don Bosco and the witness of Mother Mazzarello, and the joyful anniversary this year of the 150th anniversary of the founding of the FMA Institute, a time to look with gratitude at what has been achieved so far and to launch ourselves with enthusiasm toward the challenges of the future.

The day's meeting was then completed with a moment of communal agape, during which the Rector Major and Mother General FMA had words of mutual thanks; the meeting ended with the exchange of some symbolic gifts among those present.