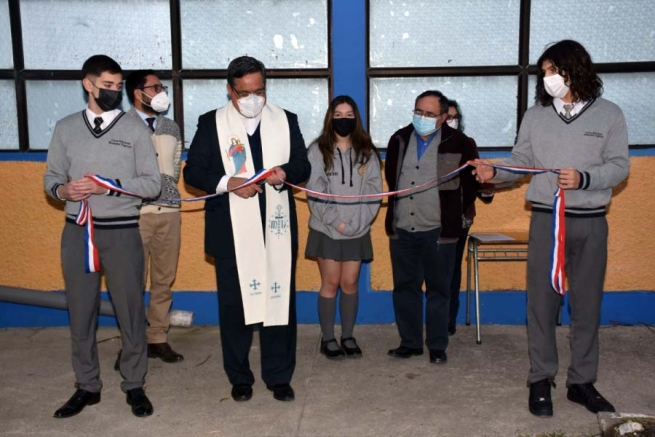 (ANS - Puerto Natales) - On June 15, the Salesian secondary school "Monseñor Fagnano" inaugurated a new television studio that will host the programs of the broadcaster "SALESIANOS TV," which can be seen on channel 62 of "TV Red Natales."

The inauguration ceremony was attended by the school Director Fr Héctor Vásquez, Principal Alex Contreras, the sisters of the "Maria Mazzarello" secondary school led by Sister Bernardita Meneses, the Secretary-General of CORMUNAT (the municipal government of Puerto Natales), the secondary school management team, and the students of the audiovisual laboratory.

The event began with a visit to the TV studio, where the guests were welcomed by students from the audiovisual lab, who presented and explained the various equipment they are working with. Regarding the project’s origin, the principal commented that "it was born out of the need to bring the school closer to students' homes and the community at large in the wake of the pandemic. Today we are making a big effort to deliver this infrastructure to serve the community, where young people bring the project to life and it becomes a real help for the community, which makes us very happy."

Afterward, Fr. Vásquez blessed the studio and appealed to those present to be good communicators.

On the same day, prizes were also awarded to participants in the contest "In search of a logo for SALESIANOS TV,"; the winner was Camila Villavicencio of the school’s 3rd grade. Carlos Paredes was second, while on the lowest step of the podium was Michelle Gallardo, an alumna of the class of 2021. In addition, prizes were awarded to children from the audiovisual workshop and participants in the "FIFA 2022" tournament, also organized by SALESIANOS TV.

SALESIANOS TV's proposal aims to be a real contribution to the community of Puerto Natales. It becomes a platform for other institutions to share and publicize their educational and cultural material.

Importantly, the first steps are also being taken for the children of the audiovisual workshop, who have already started recording their first programs.

Currently, the channel's television team consists of Julio Mancilla, Sergio Aravena, Jaime Zelaya, and Carlos Díaz. As mentioned, the channel can be seen on TV RED NATALES signal 62, streamed on WWW.FAGNANO.CL and live on the "Salesianos TV" Fan Page.