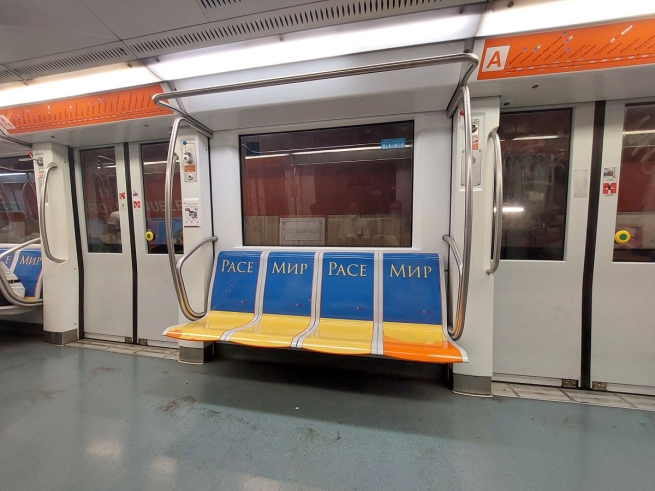 (ANS - Rome) - A full 127 days have passed since that February 24 which marked a new phase in the life of Europe and, considering the geopolitical setbacks, for the entire world. Throughout this time, the Salesian Family has not for a moment ceased to commit itself to the good of the victims of the war, to the millions of refugees and internally displaced persons. And it still continues to do so, planning new projects or carrying on those already underway.

So far at the Salesian Emergency Response Coordination, led by Fr. George Menamparampil, they have witnessed hundreds of different ways of helping war victims: in-kind gifts of all types, from baby diapers to trucks; sending money in a dozen different currencies; poems, songs, outreach and solidarity events; prayers in all shapes and numbers, up to the one million "Hail Marys" recited for the end of the war in the Diocese of Miao, led by Salesian Fr. George Palliparambil, in the Indian state of Arunachal Pradesh.

The testimonies of sympathetic closeness to Ukraine show no sign of ending, and clear evidence can be found even simply by wandering around Europe: in the Rome subway, seats have been covered in the colors of the Ukrainian national flag, just as yellow and blue are painted on the railings of a street in the Czech Republic...

But if the heart is still firmly close to those who suffer, and in so many Salesian homes around the world prayers are still being raised high for the refugees and displaced people of Ukraine - but also for those in South Sudan, Uganda, Eritrea, Ethiopia, Myanmar and so many other places these days - it is no mystery that for so many realities the funding received in the first phase of the emergency is now running out.

That is why the efforts of all those Salesian organizations that are actively working for the relief of the needy at this juncture is all the more commendable: to complete on time the projects that have been started or to extend again, by virtue of new funding, those whose end had already been planned.

The Salesian Mission Office in Bonn also plans to extend until Oct. 31 the duration of various projects, such as the one - crucial - of sending medicines for Ukraine or such as those of hospitality in the various Salesian houses in Warsaw and throughout the Province of East Poland; moreover, the projects in support of the reception in the houses of South Poland will be continued to completion,  as initially planned; while the gifts offered to hundreds of refugee families on the occasion of Easter or the supply of sheets, mattresses, pillows... can be counted among the already successfully concluded projects for all Salesian homes in East Poland.

For its part, the Salesian Mission Office of New Rochelle, USA, plans to support until natural expiration the ongoing reception projects in Krakow and other centers of that Province (Oświęcim, Pogrzebień, Rzeszów, and Lublin).

While the Salesian Mission Office in Madrid, in addition to supporting the reception of refugees in the Polish village of Czerwińsk until the end of October, will extend to the same date the sending of food and the coverage of shipments of basic necessities to Ukraine, while it will support summer activities with Ukrainian refugees in the East Poland Province throughout the summer.

The Salesian Mission Office in Turin will also support the Salesian house in Oświęcim according to original plans. While other significant projects - including sending some vans to Ukraine - have been implemented or will be implemented by other Salesian entities, such as the "Fondation Don Bosco" in Paris, the "St. Patrick" Province of Ireland, or the Swiss Salesian NGO "Don Bosco Jugendhilfe Weltweit."