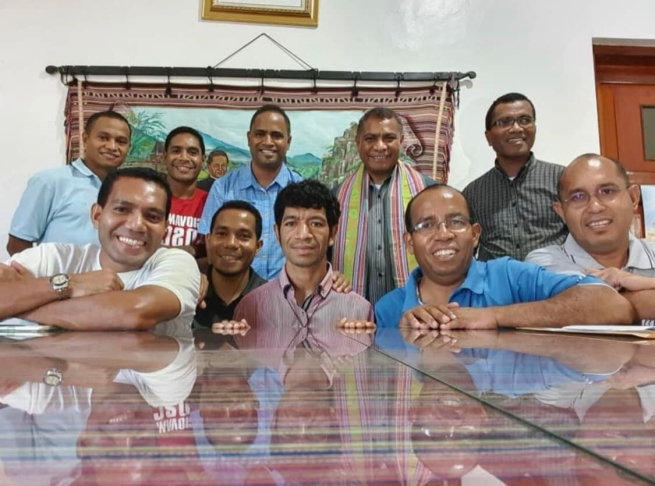 (ANS – Dili) – Last May 2022, the 20 years of the independence of the Democratic Republic of Timor-Leste was celebrated. Also, the 'new' Vice-Province of St Callisto Caravario (TLS), canonically established in 2018, shall give thanks to the first Timorese Superior of the Vice-Province, who is finishing his 6-year term. Fr Apolinario Ornai Neto was appointed in 2016 as the 5th Superior of ITM (VP of Indonesia-Timor Leste), but in 2018 the Rector Major established a new Vice-Province of Indonesia (INA) and Fr Apolinario continued his 6-year term until 2022.

At present, the TLS is the numerically largest among the 10 SDSB Vice-Provinces around the world with 168 professed Salesians and 25 novices: less than the ITM Salesians in 2016 (total of 196 SDB and 15 novices).

The TLS vice province is qualifying its confreres for a solid charismatic future: besides the 29 students of theology abroad (Australia, Italia: Messina-Gerini-Crocetta; Portugal, and the Philippines), 2 brothers in specific formation (Sandor-FIN), there are 11 confreres in specialization (Portugal 4, Indonesia 3, UPS 3, Belgium 1).

Timorese missionary generosity continues with one SDB in Japan (Hamamatsu), one in Australia (Tasmania), and 4 priests who study and work in Portugal) - as well as the 13 missionary ad gentes sent through the Rector Major (Argentina, Mozambique, Italy, Portugal, Belgium, Ecuador, Mongolia, Indonesia).

Rectors of 10 canonical houses (all numerically consistent) have been coming together almost every month for their formation and 'business' meetings. Initial formation houses are stable (two aspirantates - Dili & Fatumaca, prenovitiate, novitiate, and postnovitiate) and 6 confreres were prepared, while others are starting their formators preparation.

Also, the Youth Ministry in this 'most Catholic country in the world' (official statistics count 97% Catholics) is growing in quality - especially with the planning mentality (SEPP) and newly-opened TVET (Fatumaca), qualifying the DB primary and secondary schools through the DB School Foundation. Moreover, the Salesian Youth Movement (SYM) is working closely with the FMA and other SF members (ASC, DB Past Pupils, and ADMA).

In the other sectors, work proceeds indeed (Social Communication, Missionary Animation), thanks to the zeal of some dedicated Salesians: Salesian Bulletin, Salesian Mission Day, and tools of SC are becoming part of the daily TLS provincial culture. Two international events of SF groups - the 2016 Asia-Oceania Regional Congress of DB Past Pupils and 2021 (online) Second EAO ADMA Congress, together with the establishment of the TLS province of Salesian Cooperators contributed to the spiritual and apostolic growth of the whole Salesian Family.

Since Timor-Leste is one of the poorest countries in the ASEAN zone, steadfast growth in the economic field can however also be noticed: the Vice-Province is well connected with many missionary agencies and EAO provinces that support different needs (mainly formation, orphanage, or TVET education) and the PDO with many projects became a trusted partner around the world, such as the Don Bosco Retreat House project.