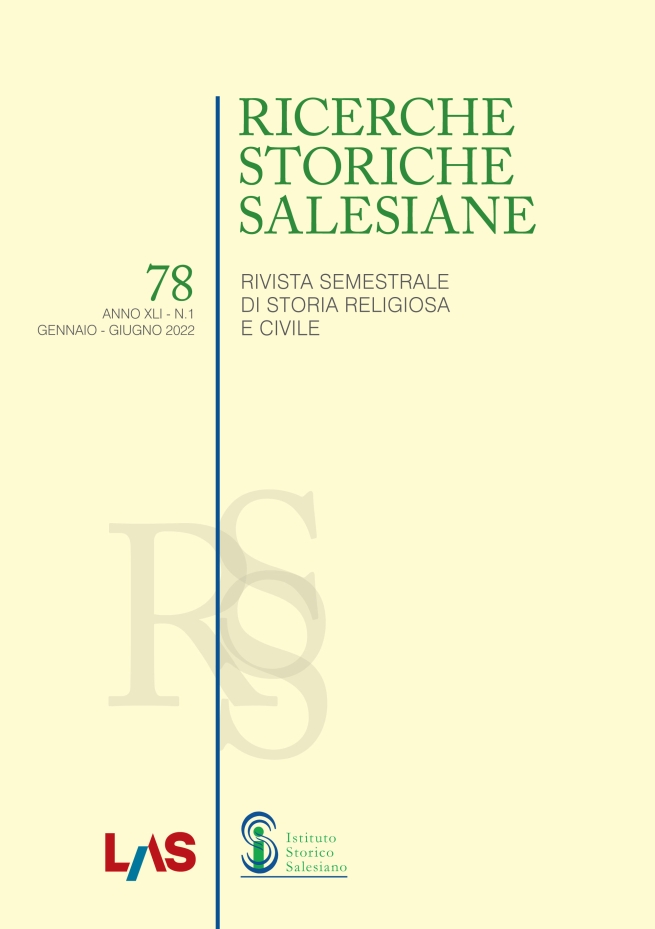 (ANS - Rome) - Issue 78, covering the January-June 2022 semester, of "Ricerche Storiche Salesiane" (RSS), the bimonthly journal of Religious and Civil History published by the Salesian Historical Institute (ISS), has been published.

In this issue’s STUDI section, the journal hosts two essays:

The article Il rettorato di don Paolo Albera (1910-1921): al governo per trasmettere il genuino spirito salesiano is the result of a study by Stanisław Zimniak. The researcher points out that Fr. Paul Albera’s rectorate has not been the subject of monographic, scholarly, and systematic research, except for a few partial investigations that, however, illuminate only a few aspects of his long government, which lasted over eleven years. With the present research, only a few important aspects of his work as Rector Major are illustrated, that is, elements of government that, although of paramount importance, have not yet been thematized, or have been dealt with without due in-depth analysis. In addition to exhibiting documentation on several topics, studied here, we are interested in this research to investigate the "leitmotif" of his being and acting as Rector Major.

The second article Alle origini del collegio salesiano Astori a Mogliano Veneto (1879-1888) is by Vito Maurizio. In 1879 Don Bosco was approached about establishing an agricultural colony for the benefit of Venice’s poor youth. But shortly afterward he communicated a new proposal from Mrs. Elisabetta Bellavite Astori, who had a substantial sum available for the benefit of the youth of the nearby town of Mogliano Veneto. Don Bosco accepted the bequest, so construction of the new building began at the beginning of 1881. The first Salesians arrived there on November 18, 1882, and already at the end of the first year, the schools were started, which in 1888 already numbered 150 pupils, as many as the boarding school itself could hold.

An original text is presented in the FONTI (SOURCES) section:

It is a comparative research carried out by José Manuel Prellezo: “La pratica della educazione cristiana” di Antoine Monfat e gli “Appunti di pedagogia” di Giulio Barberis: una selezione di passi corrispondenti. This work constitutes significant importance for understanding the genesis of "Salesian Pedagogy." It proposes, as its main purpose, to document the influence of the French educator and pedagogist of the Society of Mary, Father Antoine Monfat (1820-1898), on Fr. Giulio Barberis (1847-1927), in charge of the "school of pedagogy" initiated, in 1874, by Don Bosco in his first charitable-educational work in Turin-Valdocco.

- and the sections Recensioni, on topics related to Salesian figures and activities; and Segnalazioni, with the article on La Obra Salesiana en Linares (1964-2005). Madrid, CCS 2016.