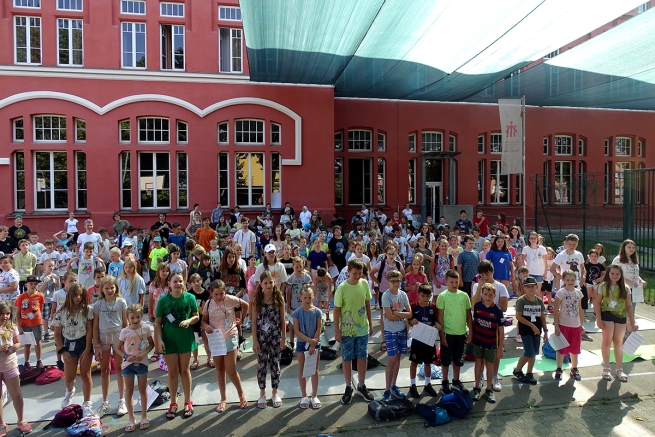 (ANS - Ljubljana) - "What kind of oratories will you do this year?" has been the most frequently asked question this spring to animators and managers of Salesian Youth Centers in Slovenia. Fr. Janez Suhoveršnik SDB, head of the largest Salesian Youth Center in Slovenia, in Ljubljana-Rakovnik, answers with a few simple words, "Again the normal oratory, in the best sense of the word," and then explains, "I mean, the crowd of smiling children and tired, but happy animators at the end of the day. This is a brief description of normalcy."

In Ljubljana-Rakovnik, the first of four weeks of the Salesian summer oratory, which was attended by more than 200 children and 40 animators, has finished. Fr. Suhoveršnik continues, "The main focus is always the special initiatives, such as the train ride and the walk for all, where the children had time for many other things: singing to the accompaniment of guitars and ukuleles, dancing to the rhythm of music, playing games and making new friends."

Fr. Mitja Štefan Franc, SDB, head of the Salesian Youth Center in Maribor, the second-largest city in Slovenia, where two weeks of summer oratories recently ended, said, "This year's experience is very good in my opinion. I think the animators learned a lot and I myself learned a lot. The summer oratory was free of masks and restrictions, which facilitated many things. We were able to go on slightly longer trips again, play together, there was more socialization among all the participants, regardless of the group they belonged to."

However, both Maribor and Ljubljana Rakovnik summer oratories have one thing in common: foreign language learning. This is not a short-term and regular activity, rather it is something that depends on the fact that young Ukrainian refugees who have come to Slovenia with their families also participate in the summer oratories. In fact, with the support of the Salesian organization "Fundacija Don Bosko," 14 Ukrainian minors participated in the first week of the oratory in Ljubljana, and another 60 are expected in the next three weeks; while 16 Ukrainian children participated in the oratory in Maribor.

Fr. Franc describes the Maribor experience, "It seems that this program was a huge novelty for many, so sometimes it was more difficult for them to follow everything that was going on and the pace to follow. And if sometimes some animators would 'blather on' about them being more on their own, I would explain to them that we have no idea what a child can go through and experience in wartime. I think we realized at least a little bit the words of the Gospel: 'I was a stranger and you welcomed me.' It is interesting how they shared their experiences with our children and of course also their views on the war situation in Ukraine. Language is not a problem for the children, some of them already knew Slovenian well, especially the younger ones, others helped themselves with online translators, and still others indulged in play and the language of their eyes and hearts."

In the words of Fr. Suhoveršnik SDB, even in Ljubljana-Rakovnik Ukrainian children and youth are getting along well with each other, and credit must also be given to the animators, true masters of communication, among whom there is also a Ukrainian university student and a university student from Russia. The distance of home and the closeness of language have created a real bond of friendship between them.

Fr. Suhoveršnik concludes, "Following the example of Jesus, who told us 'Let the little ones come to me, for theirs is the kingdom of heaven,' we have gladly taken all these different young people under our wing. In the spirit of the charism of Don Bosco, whose Oratory became a refuge for all young people of goodwill, we, too, want to create a place for all where young people feel at home and where they can find someone to care for them. And this is really accomplished: a child brought the animator a well-made origami and gave it to him with the words, 'I made it for you because you are the best animator.' As long as there are young people who give so generously of their time for other young people, we will witness the joy that circulates irresistibly and fills not only children and animators but, through them, whole families every day."