Spain – Emmanuel, Freetown street boy whose life has changed thanks to a leg operation 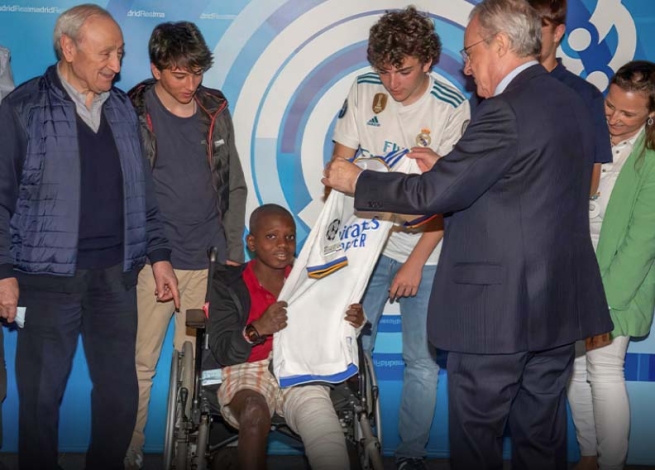 (ANS - Madrid) - Emmanuel claims to be 12 years old, but his entire past is full of unknowns. He was born with a leg disability, was orphaned by his mother, and, after being abused by his family, ran away from home to survive on the streets. He begged and lived by expediency until he encountered the reality of "Don Bosco Fambul," the Salesian center that changes the lives of the neediest young people in Freetown, Sierra Leone. Over the past two years, his life has changed: he found a familiar environment, free from discrimination, where he studied and could dream of even becoming a football player. The best was yet to come, however, and it came true recently, thanks to an operation that restored his normal ambulation and now, as he says, allows him to be "like everyone else."

The solidarity, generosity, and professionalism of the medical team of Dr. Pedro Guillén, the CEMTRO Clinic, and many volunteers, as well as Emmanuel's perseverance, strength, and willingness to overcome every obstacle, made possible what was unthinkable less than three months ago. The result of the time spent in the operating room and rehabilitation is that the little street child who arrived in Spain with so many unknowns is returning to Sierra Leone a hero, convinced that he can achieve whatever dreams he sets his mind to.

Last summer, Providence arranged for a volunteer to begin speculating about the possibility of the child traveling to Spain to undergo surgery to solve his mobility problem. Hundreds of phone calls, sending videos from Sierra Leone, and no less complicated bureaucratic procedures made this possibility a reality, and Emmanuel arrived in Madrid on April 22.

The following 26 he was admitted to the operating room of the CEMTRO Clinic and underwent successful surgery for several hours. "We were clear that it had to be an operation on the soft parts, without touching the bone, although we realized that the bone was also affected after years of resting the leg badly," explained Dr. Pedro Guillén.

Dozens of volunteers, including the staff of the CEMTRO Clinic itself and university students from "Francisco de Vitoria" and "CEU-San Pablo" Universities, took turns to accompany him around the clock, between classes, walks, games, and evenings... which contributed to his maturation. "He arrived as a weak child and in these few weeks he has grown, gained weight, and has shown that he is very intelligent and adapts very well to any situation," a nurse testified.

In just a few weeks in Spain Emmanuel has experienced things he never imagined: he has seen snow, attended a Real Madrid game, and even received a jersey with his name on it from the president of that club.

For the past month, Emmanuel has spent most of his time with a foster family and has only gone to the hospital for rehabilitation. He has integrated seamlessly with his new siblings and has begun to enjoy being, as he puts it, "like everyone else."

The medical team will continue to follow him over the next year. Emmanuel will have to wear an insole in his shoe to walk properly and will continue to strengthen his muscles. Next year he may have to go back to Spain for another corrective operation, but in the meantime, at Don Bosco Fambul everyone is waiting for him as a hero, not least because he will return "loaded with gifts and games for all the children at the center," explains one of the people who has been closest to him in recent months.

From Nigeria, Salesian Fr. Jorge Crisafulli, now Provincial of the new Africa Nigeria Niger (ANN) Province but for years Rector at Don Bosco Fambul, said, "Thank you to all those who make these miracles possible. The world is a little more beautiful with each of these boys and the miracle of Don Bosco Fambul continues. We are all together part of this dream and we are the miracle in motion."