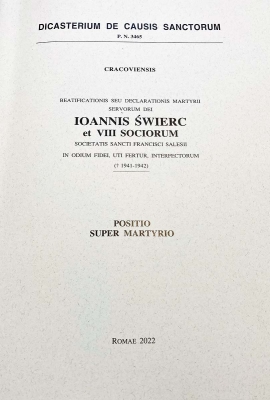 (ANS - Vatican City) - On July 21, 2022, the Positio super martyrio of the Servants of God John Świerc and VIII Companions, Professed Priests of the Society of St. Francis de Sales, was consigned to the Dicastery for the Causes of Saints at the Vatican.

The Positio had Fr. Szczepan Tadeusz Praśkiewicz OCD as the Rapporteur, Fr. Pierluigi Cameroni as the Postulator and Dr. Mariafrancesca Oggianu as the Collaborator. Structural elements of the "Positio" - which presents in an articulate and thorough manner the entire documentary and testifying apparatus concerning the martyrdom of the Servants of God - are: a brief presentation by the Rapporteur; the Informatio super martyrio, that is, the theological part in which the material and formal martyrdom of the Servants of God is demonstrated; the two Summarium with the testifying and documentary evidence; the Last Sessions and the iconographic apparatus.

After delivery, the Positio will be examined by the Historical Consultors, then by the Theologians. Then it will be studied by the Cardinals and Bishops of the Dicastery for the Causes of Saints: these articulated stages of study and evaluation will allow the Supreme Pontiff, in case of a positive outcome, to declare Fr. John Świerc and VIII Companions "Martyrs" and thus to proceed to their Beatification.

Nine Polish Salesian priests also belong to the number of presumed martyrs of Nazism. They are Servants of God Fr. Jan Świerc and the VIII Companions: Fr. Ignacy Antonowicz, Fr. Karol Golda, Fr. Włodzimierz Szembek, Fr. Franciszek Harazim, Fr. Ludwik Mroczek, Fr. Ignacy Dobiasz, Fr. Kazimierz Wojciechowski, Fr. Franciszek Miśka. As priests, all Servants of God were engaged in Poland in various pastoral and governmental activities and teaching. They were completely uninvolved with respect to the political tensions that agitated Poland during the wartime occupation. Nevertheless, they were arrested and martyred in odium fidei for the very fact of being Catholic priests.

On June 27, 1941, in the Auschwitz concentration camp, Fr. Jan Świerc, Fr. Ignacy Dobiasz, Fr. Franciszek Harazim, and Fr. Kazimierz Wojciechowski died at the hands of the SS. The latter two Servants of God, specifically, were killed, alongside each other, at the same time. Servant of God Fr. Ignacy Antonowicz died three weeks later, that is, on July 21, 1941, as a result of the mistreatment he suffered on that very June 27, 1941. On Jan. 5, 1942, Servant of God Fr. Ludwik Mroczek also died in the Auschwitz concentration camp as a result of the torture he underwent and the numerous surgeries that followed. A few months later, on May 14, 1942, Fr. Karol Golda was shot in the same camp, accused of administering the sacrament of confession to two German soldiers for the sole purpose of deceitfully extorting important secrets of the Nazi regime. Servant of God Włodzimierz Szembek also died in the Auschwitz camp on September 7, 1942: in his case, too, it was mistreatment that caused his death. All the Servants of God mentioned belonged to the Province of St. Hyacinth in Krakow. In contrast, Servant of God Fr. Franciszek Miśka, who belonged to the Salesian Province of St. Adalbert of Piła, died in the Dachau concentration camp (Germany) on May 30, 1942, as a result of mistreatment and torture.

The reputation of sanctity and martyrdom of the Servants of God Fr. Jan Świerc and VIII Companions, although hindered during the communist period, spread as early as their death and is still alive today. They were considered exemplary priests, devoted to pastoral work and works of charity, affable, always available, in everything interested in giving glory only to God, for whose sake they were faithful even to the shedding of blood.