Ukraine – "Where are you, God?" A SYM youth group finds answer in Ukraine 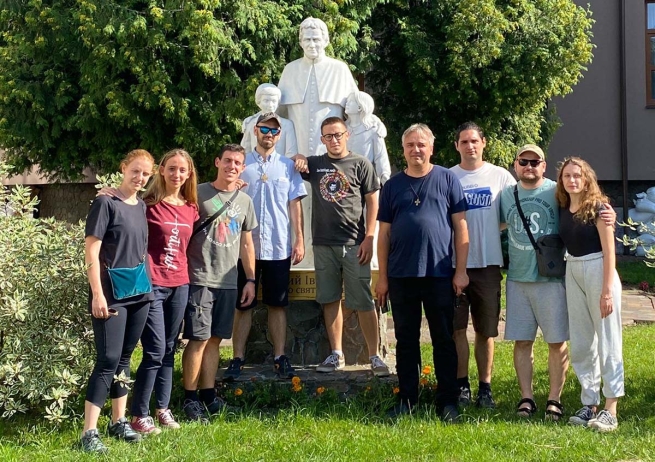 (ANS - Lviv) - During the summer period, vacations and rest from normal activities as accomplices, it is not uncommon to see young people, especially from the Salesian world, engaged in educating younger children and youth in oratories and summer centers. A smaller number of young people sometimes make themselves available to volunteer abroad, a commitment that benefits the host communities and allows them to grow in their knowledge of new realities and contexts. But it is very rare to find young people who leave their daily lives and security behind to go and bring a smile to children in a country at war. Yet, that's what a group of young people from the Salesian Youth Movement of Central Italy is doing; from July 17 to 31, they are having a missionary volunteer experience with the Salesians of the Poland-Krakow Province, with several stops in Ukraine. Below is their account of the central experience of the mission in recent days.

"We went to Ukraine, more precisely we visited Lviv, Bibrka, and Ternopil," says Fr. Marco Tagliavini, Salesian deacon, who accompanies the group. "Our experience was one of service in participating in the aid activity that the Salesians of Poland give to Ukrainian realities. Our expectations were of a country severely wounded by war, but although the signs of this conflict can be seen everywhere along the streets, we found a people trying to live everyday life. Our first stop was Ternopil, at the Greek Catholic seminary, where we were greeted with a warmth that left us amazed; soon after that, we went to Bibrka, where we also stayed. There we had a chance to interact a bit with some of the children participating in the youth summer camp, amid dances, an exchange of glances and a few words in Ukrainian, Polish and English. What left us most impressed was the feeling of home that pervaded us from the very beginning, almost as if we had always lived there."

The last stop, the one that was a bit stronger emotionally, was in Lviv. "We had the opportunity to visit 'Mariupol,' a small complex built with prefabs, thanks to the Salesians, where about 300 people from the invaded regions who no longer have a home currently reside," Fr. de Ruvo continues. "The question that resounded inside us as we saw all this pain was, 'God, where are you?' The answer was simpler and more unexpected than we expected: God was in the toothless smiles of the small children who laughed every time we made typically Italian gestures; He was in the small group of women who had found themselves talking at the small table in front of their prefab; He was in the square of Lviv, so full of life, but so afraid of the coming Russian attack. We left with the idea that we would bring God to those who needed Him most, and we come back with God who was given to us by those very people."