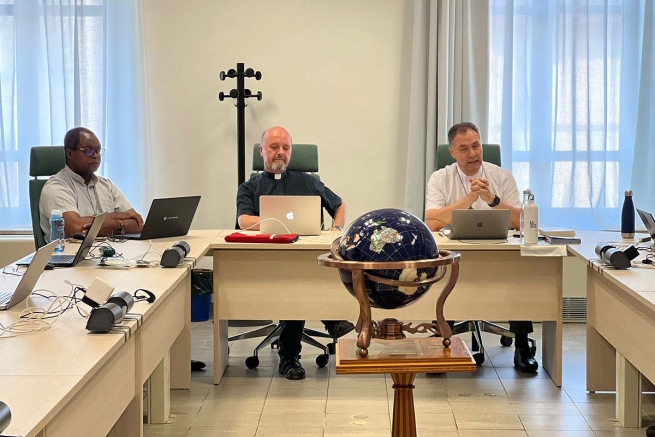 (ANS - Turin) - A new location, but the same commitments and the same thoughtful care for the entire Congregation: at the Motherhouse in Turin-Valdocco, the summer plenary session of the General Council (June 1-July 22) has just concluded. For the Rector Major, Fr. Ángel Fernández Artime, and the other members of his Council, these were days full of listening, confrontation and dialogue, and important decisions to fulfill the entrusted mission of animating and governing the Congregation globally.

In the nearly two months of activity, the General Council members worked at an extremely high pace, accomplishing a total of 41 sessions.

Superiors of two Circumscriptions were appointed:

- and Fr. Anacleto Pires, as Superior of the Vice-Province "St. Callistus Caravario" of East Timor (TLS).

- and 5 Masters of Novices.

At the level of Salesian works, 6 works were canonically erected and one new presence was opened.

Finally, as many as 13 reports on Extraordinary Visits were studied and discussed relating to:

–     Province of the Northern Philippines (FIN)

Also, during the activities of the summer plenary session, there was no lack of other moments rich in spiritual, symbolic, and fraternal value. Noteworthy are:

–     June 17, a day during which the Rector Major and several other members of the General Council went to the Monastery of the Sisters of the Vice-Province in Moncalieri to venerate the relic of the heart of St. Francis de Sales, during a special pilgrimage organized for the 400th anniversary of the death of the Savoyard saint;

–     the joint meeting with the General Council of the Daughters of Mary Help of Christians (FMA) on June 23, which represented the first meeting between the two General Councils in Turin.

–     the Thanksgiving Feast dedicated to the Rector Major, on the occasion of Don Bosco's saint’s day, on June 24 (Nativity of St. John the Baptist);

–     and the week of Spiritual Exercises (June 26-July 3) experienced by the General Council in the footsteps of St. Francis de Sales, with meditations proposed by Fr. Morand Wirth, SDB - distinguished scholar of Salesian spirituality and for years a professor at the Salesian Pontifical University of Rome (UPS) - and various stops in some of the most significant spiritual places in France, such as: Ars, the city of the famous Saint Curé Jean-Marie Vianney; Paray-le-Monial, known as the city of the Sacred Heart of Jesus, because it was there that the Visitandine St. Marguerite-Marie Alacoque had visions of Jesus after which that feast day was instituted; and Taizé, home to a globally important center of ecumenical spirituality.