Italy – Salesian Oratory in Foggia: football against the Mafia 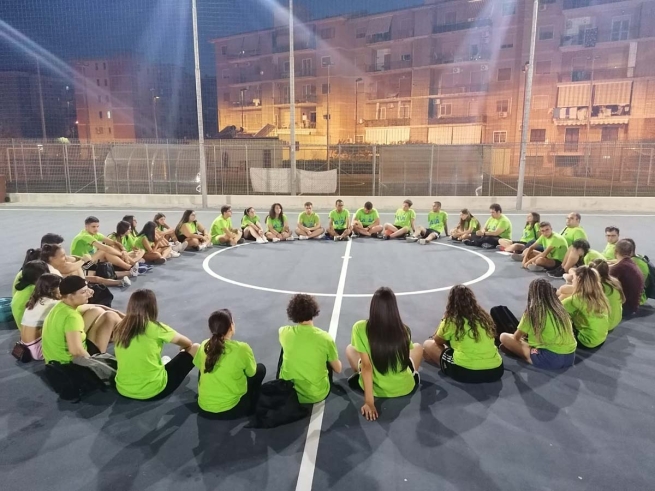 (ANS - Foggia) - They began again with football at the Salesian oratory in the Candelaro neighborhood of Foggia. And on the field, here for the first time, girls and young women took to the field. A "pink", or all-female team. "Don Bosco said to start with what the kids like and then give it an educational value," explains Massimo Marino, 47, president of the "Sacred Heart" sports association. "And what the girls were asking us was to play football."

There is certainly no shortage of space at the Salesian community oratory, attended by about 400 minors. For 50 years it has been the heart of the "dormitory" neighborhood that arose in the 1960s to provide an answer to the housing emergency. The most populous, but lacking in services. A complicated neighborhood in the city of the fourth “mafia” (the municipality has been under stewardship for a year). On July 11, a stone's throw from the oratory and in broad daylight - many were entering the church for a funeral and the sports field was crowded for the "Youth Summer Camp" initiatives - a convicted felon was killed. The next day, in front of the parish, the Salesians of the Sacred Heart, with the Presidium of the anti-mafia association "Libera," organized a sit-in. "Mafia kills, silence as well," the signs read. Because the response against the danger of resignation, they clarified, must be immediate.

The Candelaro Oratory is a small school of life, where the rules are the same for everyone, for the boss's son and the small businessman's son. Because everyone comes here. "We are working to generate systematic services for the kids. It's not enough to imagine," Marino continues, "a two-year after-school project; here after-school will have to be here forever."

For this, an agreement with the University of Foggia is taking shape. "Male and female students from different departments, such as Motor Sciences and Education, will do their internship at the oratory and contribute to educational and sports activities."

The pastor, Fr. Antonio Carbone, SDB, is even more explicit: "In these neighborhoods, in addition to an army of military personnel, there is a need for an army of educators. We need to give hope and build hope, and what we try to do is educational activities. We give educational support because without a minimum of culture you cannot get out of the sub-culture of lawlessness, ignorance and crime."

Fr. Carbone came to Foggia from Torre Annunziata a year ago. "I come from a very similar reality. We know that Foggia is among the last cities in terms of quality of life. And Candelaro is an area with a strong criminal presence. The one in July was just the latest of four murders in the area since the beginning of the year. There needs to be a strong commitment, workshops every afternoon to enhance self-expression and sports activities. Nothing like sports educates a sense of rules, of respect for others."

In the oratory, a thought laboratory, a think tank of sorts, has been created that brings together school, university, and parents. "Eight out of 10 teenagers tell me they want to leave Foggia. They want to create a future for themselves elsewhere. But we cannot allow ourselves to deprive this area of its best energies and leave it in the hands of crime," the Salesian continues.

In just a few months, the foundations have been laid for an "educating community." Explains Marino further, "We believe that educational alliances are necessary to be closer to the youth of the neighborhood, and we have taken concrete steps to formalize an educational pact that holds families together, consolidates the relationship with schools, which are a garrison of legality as well as educational in the neighborhood, and then we have expanded the network to other associations, the parish, and the university."

The Volunteer Service Center (CSV) of Foggia supported the project of "A Kick to the Pandemic." "The Social Promotion Association 'Sacred Heart' is working with great generosity," concludes President, Pasquale Marchese, "and a sense of community in a complicated neighborhood like Candelaro. The project, as well as the other activities that the volunteers are carrying out, offers moments of serenity and healthy aggregation, taking the boys and girls of the neighborhood away from the street, often a 'bad teacher.'"