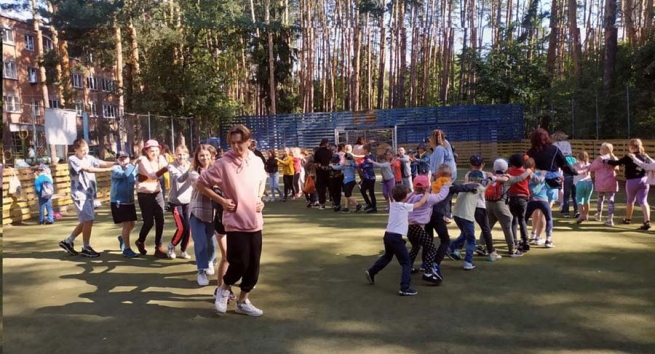 (ANS - Rome) - "It is enough that you are young for me to love you very much," Don Bosco used to say. However, his universal love for young people had a preferential way for the young people who were most in need and most tried by life. Such as young refugees, those who had to leave their country, their affections, and their home because of war; or those, today, who have remained in Ukraine, risking their lives. Today, the Sons of Don Bosco and all those who share his legacy and mission are working across the board, and in so many different realities around the globe, to provide opportunities for young people who have escaped war so that they may have an opportunity for recreation and fun, as well as growth and development for their future.

Pictures of Ukrainian children, teenagers, and young people involved in Salesian summer activities are arriving these days from various parts of the world. Looking at them, one does not notice the bad experiences and suffering that they nevertheless keep in their hearts and memories, because in play and in relationships with their peers they find a balm that, at least for a while, alleviates all pain.

A group of eight Ukrainian boys, aged between 14 and 17 years, who have found refuge in Slovakia since the outbreak of war, are these days in Malta, for a ten-day vacation of relaxation and recreation. Their vacation is the result of collaboration all within the Salesian Family, having been organized by the Past Pupils and Friends of Don Bosco of Malta and Slovakia, in collaboration with the Salesians of Don Bosco and under the sponsorship of the World Confederation of Past Pupils. In addition to the various activities that help the children relax and have fun, the youngsters are also taking some daily English language classes, with the hope that such training will be useful for their future.

And always in this same spirit in the Czech Republic, refugee children and young people are not only offered fun and carefree activities in summer camps but are also offered Czech language lessons so that they arrive prepared for the opening of the forthcoming school year.

"Every child has the right to enjoy childhood. It is the task of the adults around them to meet this need. War-affected children need even more attention from us: activities that engage them with their hearts and souls help them cope with the trauma of having their families torn apart, of witnessing violence and destruction, of being exiled from their homes," concludes Fr. George Menamparampil, Coordinator of the Salesian Response to the Ukrainian Emergency.