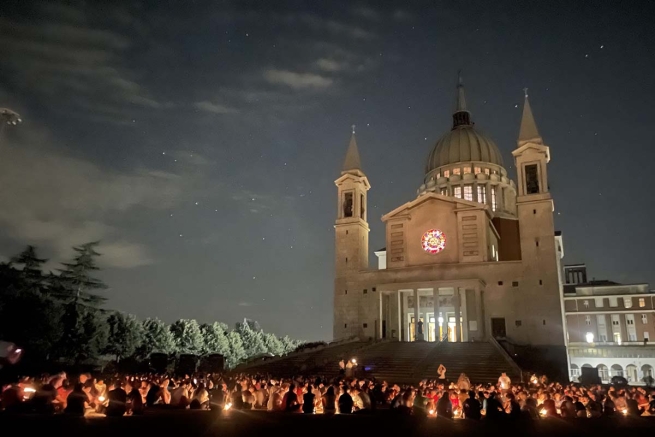 (ANS - Castelnuovo Don Bosco) – The Campobosco 2022 of the young people animating the works of the Salesians and the Daughters of Mary Help of Christians of Spain and Portugal is already in Italy... and the participants wasted no time to begin the related visits to the sites that marked Don Bosco's childhood and youth.

In this edition, given the large number of young people who decided to participate, two large groups were formed to carry out all the activities planned for each day, but separately and at different times.

After the inauguration on July 30, the second day of Campobosco took the participants - alternating with different times for the two groups - to visit Salesian Barcelona. They visited the Martí-Codolar Museum and were able to immerse themselves in Salesian history, with that special visit that Don Bosco made to Barcelona between April and May 1886, recalling the historic photograph of May 3, 1886, with Don Bosco seated, surrounded by the orphan boys of the Sarriá oratory, together with various prominent figures of Barcelona society, the Venerable Doña Dorotea de Chopitea, and Fr. Rua, among others. They also went to the Salesian presences of Can Prats, the parish of Mary Help of Christians in Sarriá and the nearby Torre Gironella; and the Expiatory Temple of the Sacred Heart of Jesus on Mount Tibidabo, entrusted to the Salesians, where, in addition to enjoying a spectacular view of the city of Barcelona, they were able to visit the Crypt with the chapel for perpetual adoration of the Blessed Sacrament, and the Upper Church, at the foot of the huge 8-meter-high statue of Jesus.

August 1 was, instead, the day of a long journey of over 14 hours by bus that took all members of Campobosco2022 to Castelnuovo Don Bosco, Italy, and specifically to the hamlet of Colle Don Bosco, where the Saint of Youth was born.

On Tuesday, August 2, now on "Salesian Holy Land," the first group was able to visit some of the most emblematic places there. Among them: the little house of the Becchi, where little John lived until the age of 12; the Don Bosco Temple, built on the site of the Biglione farmstead - where Don Bosco's father worked - and articulated into an upper and a lower basilica; Joseph’s House, built by Don Bosco's brother, the ground floor of which was renovated to become the present chapel dedicated to Our Lady of the Rosary, and which also houses the Museum of Peasant Life in 19th-century Asti; the monument to John Prestidigitator; the Lawn and Chapel of the 9-Year Dream; the Monument to Mamma Margaret or the Missionary Ethnographic Museum.

This was followed in the afternoon by a group meeting and a penitential liturgy, presided over by the General Counselor for Youth Ministry of the Salesian Congregation, Fr. Miguel Ángel García Morcuende.

The second group, on the other hand, began their day with a Mass in the upper basilica of the temple, presided over by Fr. Juan Carlos Pérez Godoy, Councilor for the Mediterranean Region; in his homily, he spoke to them about the three themes that Don Bosco delved into and on which he matured his personal vision during the years he lived in Chieri - a locality that the youth would later visit that morning. The Salesian highlighted the value of vocational discernment, that of spiritual friendship - pointing out some of the good friends John Bosco had during his time in Chieri, including the Jew Jonah and Luigi Comollo - and finally the importance of the pastoral zeal that burned in John Bosco's heart, which would lead him to create the "Society of Cheerfulness."

After the celebration, the members of the second group then left for Chieri, with stops at the cathedral, the famous Caffè Pianta where Don Bosco worked and stayed for six years, the seminary where he studied...; and later they also reached the villages of Castelnuovo Don Bosco, very close to the birthplace in the locality, where John Bosco received the sacraments of Baptism and Communion and spent part of his childhood; they also visited Morialdo and Mondonio, places intimately linked to the first fruit of holiness of Don Bosco's Oratory, St. Dominic Savio.

For all the young people and their companions taking part in Campobosco 2022, the intense day ended with an emotional procession with torchlight procession around the Don Bosco Temple, and a final prayer inside the basilica.