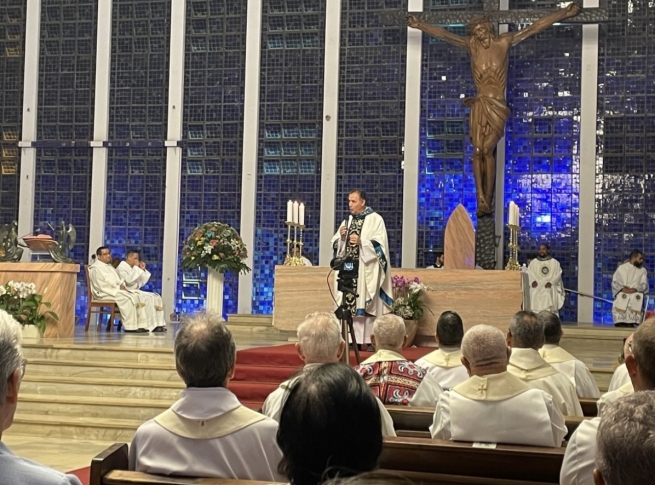 (ANS - Brasilia) - In an atmosphere of joy and fraternity, the Animation Visit of the Rector Major, Fr. Ángel Fernández Artime, to the Salesian Province "St. John Bosco" of Belo Horizonte, began yesterday; it continues until next August 29.

Yesterday morning, August 25, the Successor of Don Bosco arrived in Brasilia, where he was welcomed by Fr. Natale Vitali, Provincial Superior of the BBH Province. Also yesterday, he took part in the first of the many appointments scheduled for this week. In the afternoon, in fact, at the Don Bosco Shrine in Brasilia, the Rector Major presided over the Eucharistic Celebration for the closing of the 22nd Provincial Chapter and the Province’s 75th anniversary.

Fr. Ángel Fernández Artime preached the homily in Portuguese. During the homily, he said he felt moved to see Don Bosco's casket in the presbytery, like the one present in Valdocco, since this, he said, "reminds us where Don Bosco's dream was born and makes us understand that the Spirit of God takes us further, always for the young."

At the conclusion of the Provincial Chapter, the Rector Major emphasized that communion is a beautiful expression of "Salesianity" in the Church and that the only path to follow, as Don Bosco did, is that of fidelity to the young, especially for those most in need, to ensure the vitality of the charism in the world.

Fr. Ángel Fernández Artime then paid tribute to the 75th anniversary of the St. John Bosco Province and affirmed that "the Lord awaits from each one the fulfillment of God's dream, which through humility invites us to offer to the world the Charism that the Holy Spirit gave to Don Bosco."

The Rector Major concluded his homily by giving thanks for the presence of the Salesian Family, which in diversity makes strong the Charism and mission of the Salesians in the Province, especially the laity, families, and youth, and so together it is possible to do many things, for the good of the Church in the world.

After the homily, he handed over the Cross to the Salesians with perpetual vows and stressed the importance of being like the Good Shepherd in the mission that God has called us to follow.

The appointments will continue in the coming days. This evening, at 6:30 p.m. (Brasilia time), the Eucharistic Celebration with the Salesian Family is scheduled, followed by the blessing of the Monument dedicated to Don Bosco. Tomorrow, instead, the Rector Major will meet young people at the Salesian School in Brasilia, receive the Perpetual Profession of a young Salesian, and bless images of St. Mother Mazzarello and St. Dominic Savio at the Don Bosco Shrine in Brasilia.