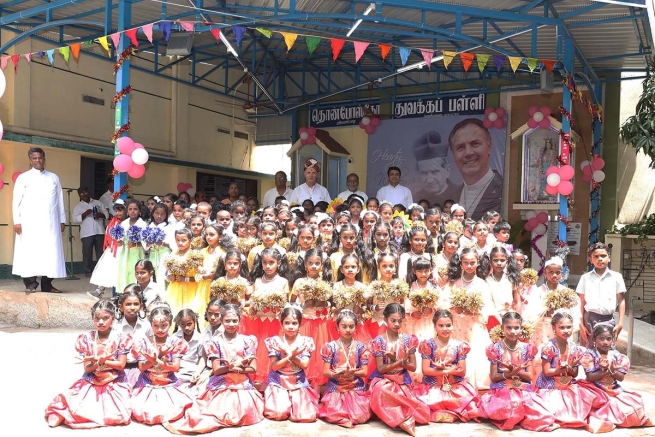 (ANS - Chennai) – Don Bosco Beatitudes received the Rector Major and the Salesian Family members on his last day of stay in the province of Chennai. All the sectors at the Don Bosco Beatitudes campus joined with enthusiasm to welcome the Rector Major. The beneficiaries of the different sectors, namely the parish, school, youth centre, women self-help groups, Tailoring and typing centre, Creche, Home for the aged, and the Nirmala primary school welcomed him warmly with a variety of cultural expressions - dances, songs and traditional music.

The programme with the Salesian Family began with a note of welcome by the Rector of Don Bosco Beatitudes, Fr. Joe Andrew who sang a popular Spanish song to which the Rector Major also joined in singing with great enthusiasm.

Fr. Emmanuel Maddhichetty, the principal of Don Bosco Theological centre invited the Rector Major to release his book titled "Ethics of Mercy for those in wounded marital love according to Amoris Laetitia". Another book titled “Dan's Den” authored by Daniel Joseph a boarder at St. Bede's Anglo-Indian higher secondary school was a tribute to all  the Salesians who work for the youth. The Rector Major then felicitated the different heads of the Salesian Family.

In his message to the Salesian Family, Rector Major expressed his gratitude to all the members of Salesian Family for their great dedication and service in taking forward the mission of Don Bosco. He commended the services rendered by Don Bosco Beatitudes to all those in the fringes of the society and appreciated the different Salesian family members who were working in unity and harmony.

He affirmed: “I am deeply moved by the numerous services carried forward for the poorest of the poor from the womb to tomb, and definitely I would like to write about this in the next edition of the Salesian Bullettin.

Later in the afternoon, the young people of the Salesian institute of Graphic Arts (SIGA) and Don Bosco College of Arts and Science gathered around the Rector Major to bid him farewell as he left to the Airport for his next destination Goa, where he will be preaching the Annual Retreat to all the Provincial Council members of South Asia Region.