Kazakhstan – "Fraternity unites us all, as sons and daughters of the same Heaven": Pope Francis at Congress of Leaders of World and Traditional Religions in Nur-Sultan 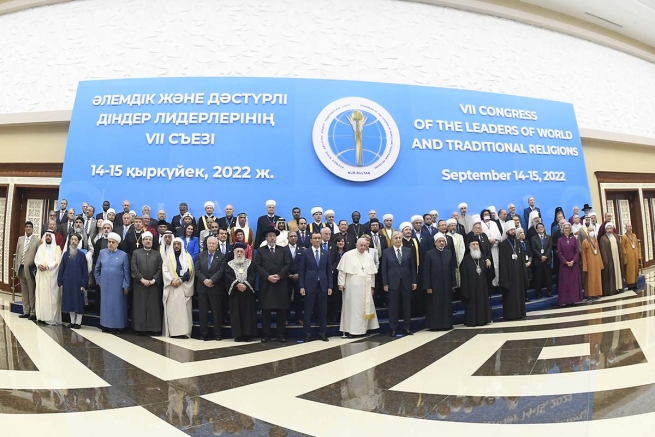 (ANS - Nur-Sultan) - The 38th Apostolic Journey of Pope Francis began yesterday, Sept. 13. Until Sept. 15, the Pontiff will be in Nur-Sultan, the capital of Kazakhstan, in the heart of Asia, where he traveled to take part in the 7th Congress of Leaders of World and Traditional Religions.

Pope Francis arrived in Nur-Sultan yesterday afternoon and was welcomed with a ceremony at the international airport in the presence of the Apostolic Nuncio, Monsignor Francis Assisi Chullikat, and the President of the Republic of Kazakhstan, Kassym-Jomart Tokayev.

Immediately afterward, the Holy Father went to the Presidential Palace for a courtesy visit to the President and a meeting with civil authorities and the diplomatic corps, to whom he delivered his first official address. "I come as a pilgrim of peace, seeking dialogue and unity. Our world is in urgent need of this, it needs to find harmony again," Pope Francis began by addressing those present. It was a long speech full of reminders of the values of peace, democracy, and religious freedom. The Pontiff also recalled the crucial role of Kazakhstan, defined as a country "at the crossroads of relevant geopolitical junctions" and fundamental in mitigating conflict. A country, the Pope remarked, that with its two souls - European and Asian - is a link between East and West.

On the morning of today, Sept. 14, Pope Francis spoke instead at the 7th Congress of Leaders of World and Traditional Religions, being held at the Nur-Sultan Independence Palace. Imams and patriarchs, rabbis, Buddhist monks, mufti and diplomats, and representatives of international organizations sit together these days to dialogue and demonstrate that together it is possible to overcome any differences.

In his address, Pope Francis touched on numerous topics, from education to war, from Care of Creation to the many challenges posed by the Covid-19 pandemic in recent years. The Pontiff began with a warning: that violence should never be justified. He went on to remind the audience of the importance of investing in education, rather than armaments, and called on everyone to free themselves "from those reductive and ruinous conceptions that offend the name of God through rigidity, extremism, and fundamentalism, and desecrate it through hatred, fanaticism, and terrorism, disfiguring even the image of man."

Addressing those present, calling them "brothers and sisters" and appealing to "that fraternity that unites us as children of the same Heaven," the Pontiff hoped that this meeting could open a path of peace, centered on respect, honesty, and dialogue. And to respond to the "thirst for peace" that the world has, he reiterated that "we need religion." For this, the essential condition is religious freedom, a "fundamental, primary and inalienable right, which must be promoted everywhere."

In conclusion, the Pope wanted to thank Kazakhstan for "the effort to always try to unite, to provoke dialogue, to make friends. It is an example that Kazakhstan gives to all of us, and we must follow it, go along with it."