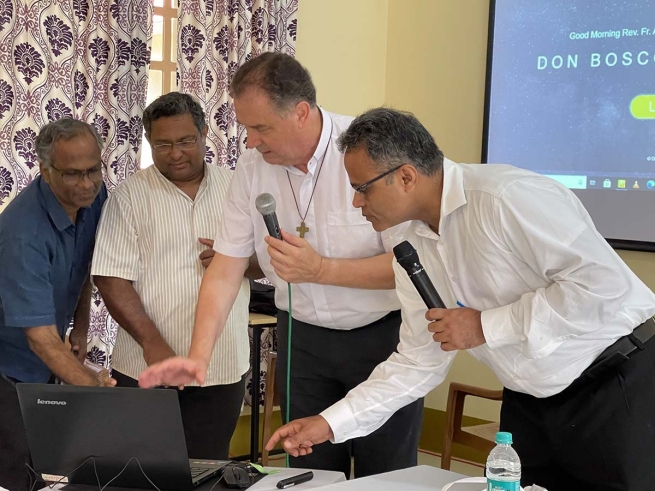 Addressing the superiors gathered, Father Artime said, “25 years ago, I was communicating with you through emails, and today we know so much has changed about communication in the digital world. Communication today is vast, creative and happening at a fast pace. I welcome this website as an active tool we need today to collaborate, form a network of like-minded people, and reach out to the young people who live and breathe in this digital world. I congratulate the team who has worked to make this website possible and wish them success in their venture.”

BOSCOM, the inter-provincial social communication sector of Salesian India, was formed in 1993 with Father Martinelli, General Councillor for Social Communication and Father Thomas Panakezham, Regional Councillor, at the Provincial house in Kolkata. It took note of the rapid changes and explored ways to be futuristic in the field of communication. Thus, the online Bosco Information System (BIS) took shape in 2001, and donboscoindia.org was born. It was the virtual face of the SPCSA (Salesian Provincial Conference of South Asia), with the registered office at SPCI (Salesian Provincial Conference of India) in New Delhi, India. Credit goes to Father Joaquim D'Souza, the then Regional Councillor, who initiated and supported this flagship project at the national level.

Subsequently, Father Maria Arokiam Kanaga, as the successive Regional superior for the two terms, multiplied the online presence. Salesian India saw various networks registered to bring coordination and visibility of Salesian Missions from varied sectors like schools, technical, social, psychological etc. Collective networking and synergizing were in motion by creating separate portals for every province and network in the region to create online visibility and seamless sharing of news, photos, information, and good practices at the inter and intra-province levels.

A two-decade-old pioneering effort comes in an upgraded package with a more inclusive identity. It comes loaded with new web technologies, upgraded technical infrastructure and features that include cloud computing, an online workspace, digital workflow tools of communication and the possibilities of integrating AI into the information sharing and public engagement ecosystem. Father P T Joseph, SPCSA Webmaster and Elroi Software Solutions team have made the project see the light of day.

Don Bosco South Asia Website opens the windows for the Salesian family to journey together on one portal, making Don Bosco and his mission visible in India, Sri Lanka, Bangladesh, and Nepal.

Moreover, the Rector Major released the book GLOBALIZATION AND GLOBAL FRATERNITY, authored by Father TC George SDB, Professor of Pastoral Theology, Kristu Jyoti College, Bangalore, at the meeting of the Salesian Family Major Superiors of the South Asia Region in Goa on September 14, 2022. Copies of the book were presented to Father Biju Michael, the General Councillor for South Asia and Father Clive Telles, the Provincial of Panjim, Goa. Father Jose Koyickal, the Provincial of Bangalore province, presented the book.