Italy – Opening of "SDB Change Congress," Br. Muller, SDB: "We have the mission to shape the future with young people, giving them hope" 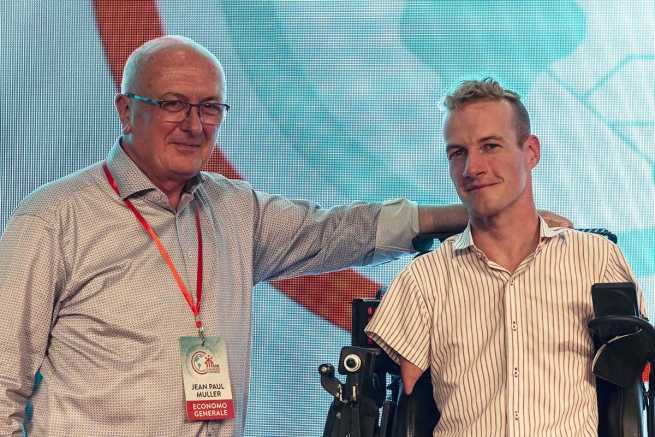 (ANS - Rome) - Yesterday, Monday, Sept. 19, at the Salesian Pontifical University (UPS) in Rome, the "SDB Change Congress," the event attended by 250 people including Provincial Economers, Heads of Planning and Development Offices (PDOs), Mission Offices, Salesian NGOs and international organizations, began. After an initial welcoming moment, in which Congress tablets and gadgets were handed out, members of the Don Bosco Network and Mission Offices in attendance met to discuss projects and meet with Economers and PDO Managers.

The official opening of the "SDB Change Congress" took place in the afternoon. Following the greeting of the Rector Magnificent of UPS, Prof. Fr. Andrea Bozzolo, the General Economer of the Congregation, Br. Jean Paul Muller, SDB, welcomed all participants with his opening remarks.

"The five central themes we set then have remained highly topical, although we would certainly add others today," he began, then outlined some of the emerging challenges: wars in different parts of the world, emerging critical issues in the climate system, mass migration, and the processes of computerization that is changing the social fabric in a way similar to industrialization.

"We live in a world that is vacillating (...) Fear, however, destroys solidarity and creates an atmosphere of growing rivalry," he added further.

But without losing either hope or enthusiasm, he forcefully reminded, "We Salesians and all those associated with us have the mission of shaping the future with young people, giving them hope, bringing them together with people of good will, being for them an example of courage in facing challenges (...) As Salesian Family we must firmly anchor the guides of our young people's journey towards their future." And again, "Many, many solutions for our challenges already exist and are in this room, we just have to find them by daring to get closer to each other."

This was followed by the day’s core speech, a testimony entitled, "Accepting the Future," by speaker and author Janis McDavid.

As an orator, Janis McDavid revealed himself to be profoundly authentic, approaching each topic with the awareness that dreams are achievable. Using himself as an example, he shared his experiences and positive thinking, leaving the audience in the room determined to seize opportunities even in the most adverse times. Born without arms or legs, Janis, in his childhood and youth had to face many challenges with enormous courage, without letting his disability decide what he can and cannot do or influence his lifestyle. "I want to live in a world where the characteristics that distinguish us do not lead to discrimination," he argued.

Treasuring his statements, the assembly, pleasantly engaged by all the speeches, concluded the first day of the Congress.