Italy – "A great gift from the Lord": Salesian School of Spiritual Accompaniment 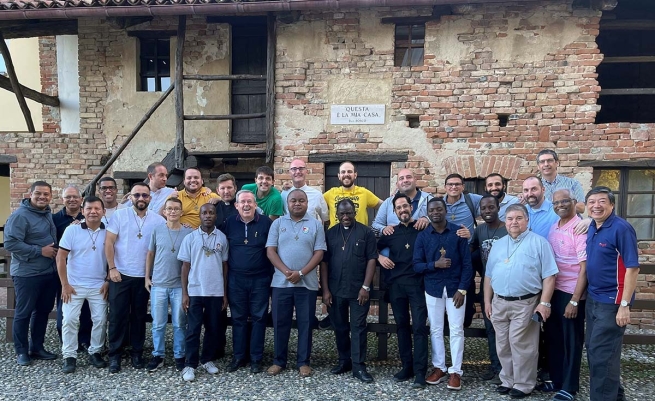 (ANS - Castelnuovo Don Bosco) - An experience above expectations, capable of opening new horizons, to be kept as a gift from the Lord: enthusiastic are the comments of the participants in the second edition of the Salesian School of Spiritual Accompaniment for Italian-, Spanish- and Portuguese-speaking Salesians, carried out on the Salesian Places, between Valdocco and Castelnuovo Don Bosco, from August 17 to September 19. A total of 22 Salesians from 17 Provinces participated in this edition.

Coordinated by Br. Raymond Callo, SDB, of the Sector for Formation, and Fr. Fabio Attard, Coordinator of Formation of Salesians and Laity in Europe, the School experience also saw the presence in the final phase of the General Councilor for Formation, Fr. Ivo Coelho.

"Before participating I thought it would be the usual intellectual course detached from the personal and pastoral experience. I changed my mind," Vittorio Cunsolo, a Salesian from the Central Italy Circumscription (ICC), testified today. "Already in the first days in Valdocco, the way it was conducted favored the comparison between the life experience of the young priest Don Bosco and my personal experience. The extended times for internalization, the questions that guided us, the sharing in groups, all helped to make Don Bosco's life dialogue with one's own life."

Fr. Cunsolo continues, "The high point of the course was the Spiritual Exercises. A week in complete silence in a Rosminian monastery. For an activist like me, spending a week in complete silence was, I thought, a bit of a waste of time. One could listen to commentaries on God's Word, read good spiritual books, compare oneself with other confreres, etc., …and instead to be there in silence… I trusted them and tried to slow down my hectic pace of life. The daily discussion with a guide of one's choice accompanied me in slowly immersing myself in that silence, which was a gateway to interiority. The first fruit of silence is calmness and from this: profound listening. From deep listening, the Encounter. You regain contact with yourself and with the One who was there waiting. I understood what St. Ignatius meant: 'It is not knowing much that satiates and satisfies the soul, but feeling and tasting things internally.'"

"The last few weeks," the ICC Salesian concludes, "we spent at Don Bosco Hill where we were able to calmly reread, together with ‘little John’, the years of our formation. To see the plot that Providence was weaving. I deepened my knowledge of Don Bosco and the many figures who helped him grow, several things I did not know. Accompanied by the team, we were finally able to work on ourselves and the way of being among young people. I became aware of qualities and aspects to improve. Thanks to the testimony of the team, their fraternal and at the same time professional presence, I was able to enrich myself by learning from their Salesian way of accompanying us. My thanks to the Congregation, the team, and all the fellow students who made this possible."

Fr. Domingos Chikenge Chimuco, an Angolan Salesian, for his part, observes, "For me, it was an extremely beautiful experience and meant a lot in my life. It gave me much broader horizons on the techniques of spiritual accompaniment, in the Church and especially in Salesian spirituality. It was five weeks that were very well organized, with many moments of prayer, reflection, sharing, games, etc. It was five weeks of great familiarity with the whole reality of the Salesian Family in the world. It is a very current school and it is given to us by the Holy Spirit in the Congregation, especially for the formation of the confreres, for the spiritual accompaniment of the young people in formation, and not only, and of the people who approach our works and services."

Fr. Sergio Astorga, from Chile, says finally: "The Salesian School of Spiritual Accompaniment, offered by a worldwide team of the Department for Formation, ended on September 19. We who participated in it appreciated it as a great gift from the Lord. It was a unique experience in a group composed of confreres from different countries of the Salesian world, and the atmosphere of prayer, the depth of reflection, the conviviality and teamwork, the recreation... everything was exceptional.

Begun in Valdocco and concluded at Colle Don Bosco, it enabled us to acquire tools for individual spiritual accompaniment and undertake paths of conversion. We are now better prepared to offer better service in our respective Provinces. From the bottom of my heart: thank you very much."

Launched in its first edition in August 2021, the School of Salesian Spiritual Accompaniment is one of the ways of implementing the recommendations contained in the text "Young Salesians and Accompaniment - Orientations and Guidelines," as well as the fourth program guideline offered by the Rector Major to the entire Congregation after the 28th General Chapter. The urgency of the formation of spiritual guides, moreover, had also been expressed in the worldwide survey on Salesian Personal Accompaniment conducted in 2016 and in which about 4,000 Salesians participated.