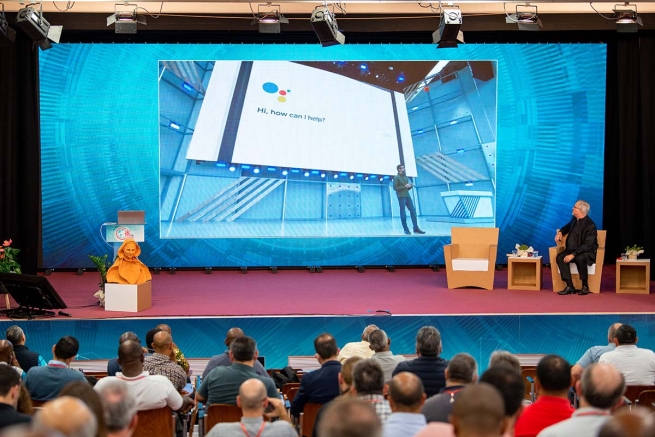 (ANS - Rome) - Transparent economic management and effective accounting, but also specific attention to the meaning of the Salesian mission - young people - and to the charismatic and spiritual identity of Salesians and anyone who participates in the Salesian mission. These were the main thrusts of the speeches on Thursday morning, Sept. 22, at the "SDB Change Congress." Instead, the afternoon was devoted to communication and the emerging topic of Artificial Intelligence (AI).

Opening the proceedings was Fr. George Tharaniyil, Director of "DBTech Africa," the Salesian Vocational Training Coordination Network of the Africa-Madagascar Region. In his talk, besides illustrating the work being carried out in the region’s different Salesian entities, the speaker also outlined the processes already in place and those to be activated to respond to the challenges of vocational training and employment for young people in Africa.

On behalf of "Compagnia Privata," a company that accompanies the work of the General Economer's Office in advising and monitoring the economic activities of the various Salesian Circumscriptions, Dr. Alex Garattoni illustrated the risk profiles inherent in the financial portfolio of the Provinces, presenting the analytical techniques used for risk assessment and the cautions to be observed in financial investments.

The day’s central moment was the session "Salesian Leadership in Changing Times," which was moderated by Fr. Fabio Attard, Head of Formation of Salesians and Laity in Europe, and featured Annette Schavan, former German Federal Minister for Education, and Rector Major Emeritus, Fr. Pascual Chávez Villanueva. In an articulate talk, Dr. Schavan spoke of the permanent need for theology for reflection in a phase such as the present, of changing times; she examined the Pontificate of Pope Francis and highlighted his commitment to the renewal of the Church; she gave lights of hope by identifying in solidarity and diversity elements with which, still and again, the Church and Christianity can do much more in building the future. And she concluded by calling for the pursuit of renewal guided by the Holy Spirit.

In his report, Fr. Chávez started from two questions - Who is God for us? Who am I in His project? - to develop a proposal for an authentic spirituality that lives and bears witness to the faith, and that is Salesian, that is, such as to "act to build the kingdom of God" and "serve the cause of life in the school of Don Bosco." In this sense, he stated that Salesian youth spirituality calls for a commitment to human advancement and political and cultural transformation from all people of goodwill as well as public institutions, and he called for a rediscovery of the authentic meaning of citizenship, that is, one that involves a commitment to building economic and social systems based on justice and equity. Finally, he urged everyone to live as contemplatives of the everyday.

The afternoon then saw an in-depth look at the topic of communication, in the session entitled: "Communication as a Duty: reading and understanding the world of Economics." On the occasion, journalist Pietro Saccò, of the daily newspaper Avvenire, spoke about the importance of informing oneself on the economy, the consequences of no or bad information, and the options available to access good and accurate news; then, Gian Francesco Romano, editor of the Agenzia iNfo Salesiana (ANS), presented the agency and motivated and encouraged those present to make known the good that is being done in the Salesian world.

In the last session of the day, priest and lecturer at the Pontifical Lateran University Philip Larrey animated a brilliant presentation on Artificial Intelligence: what it is, what its characteristics are, what it entails today, and what its developments may be. And in the face of possible fears about the advancement of machines to the detriment of the human, he urged acceptance of the idea that AI will be increasingly present in people's lives; and he called on the Salesians to educate young people in this field as well so that they can enter the large leading companies in the field and imbue them with Salesian values.

Finally, the day ended with a meditation by artist, missionary, and Don Bosco sympathizer Mauro Baldessari, who presented one of his works of Mamma Margaret and highlighted the female component of the Salesian mission.

To review the day's speeches and/or watch coverage of the entire event, follow the "SDB Change Congress" Facebook page.