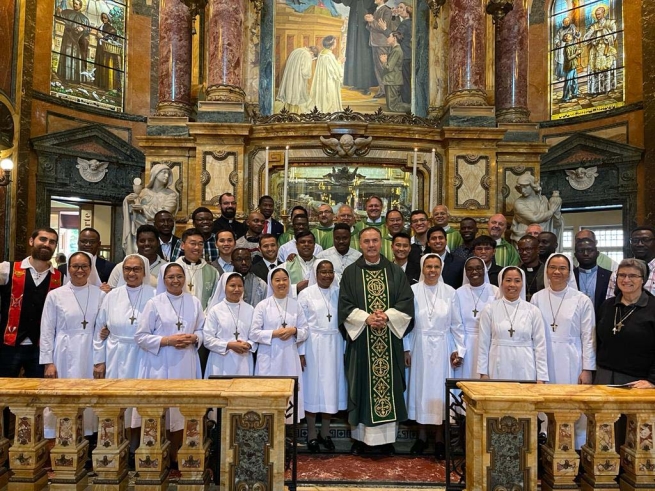 (ANS - Turin) - On Sunday, September 25, at the Basilica of Mary Help of Christians in Turin, the Rector Major, Fr. Ángel Fernández Artime, presided over the Mass with the missionary sending off ceremony of 19 Salesians of Don Bosco and 9 Daughters of Mary Help of Christians (FMA). Six Salesian missionaries did not receive their visas in time. For the Salesians, it was the 153rd missionary expedition, while for the FMA it was the 145th missionary expedition.

In his homily, Fr. Á.F. Artime reiterated that it is thanks to the missionaries that today the Salesian charism is spread all over the world; without them, Salesians would be few and present only in Italy. "Our way of living together from all parts of the world is a prophetic word," he explained, noting then how the circumstance of the missionary sending was a propitious occasion to say thanks to the Lord for the missionary call of these religious, a particular call within the common Salesian vocation and able to transmit enthusiasm to young people in the name of the Lord, with a Salesian heart.

The Successor of Don Bosco then resumed the dialogue he had the night before with the newly-missionaries of SDB and FMA: "Today the outlook, the approach, cannot be the same as in Don Bosco's time; we do not go to teach those who do not know. Instead, we go to share life, offering what we are and surely receive much more than what we offer."

Commenting on the Word of God, the Rector Major pointed out that the Gospel of the day was crystal clear: there is a very rich man, whose name is not known because his heart is so hard that he has lost himself, and a poor man named Lazarus. The problem is not wealth, but a dead heart, unable to see anything beyond the self, unable to feel compassion and mercy. "Let us not forget that we were born for the poorest kids, not to do who knows what, but to meet them there where the neediest are in every part of the world." Sometimes it is not about material poverty but the great emptiness in the meaning of life and extreme loneliness, sometimes nothing is missing, but everything is missing. "Take care of yourselves, but give your best, give life every day. So many are waiting for us without knowing us!" urged the Rector Major.

Following the profession of faith, the solemn commissioning and handing over of the missionary crosses at the hands of the Rector Major took place. On behalf of Mother Chiara Cazzuola, Mother General of the FMA, who was unable to attend, it was Sister Ruth del Pilar Mora, General Councilor for Missions, who handed over the missionary cross to the missionaries.