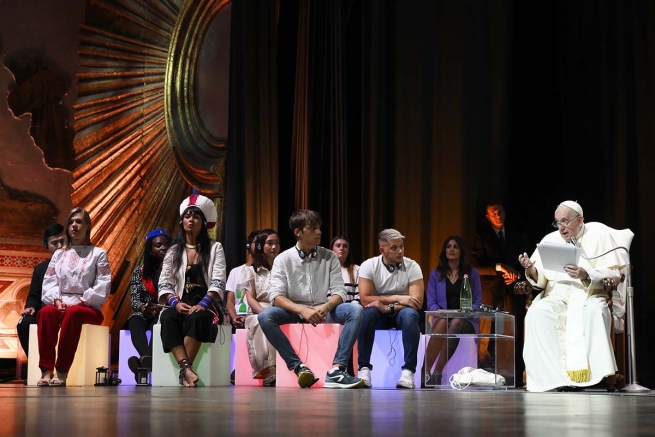 (ANS – Assisi) – The “Economy of Francesco” 2022 Global Event was held from 22 to 24 September in Assisi, Italy.  Over a thousand young economists, entrepreneurs, and changemakers from more than a hundred countries attended this event.  Leann D’Souza and Denzil Prato, both from India, participated in the EOF Global Event on behalf of the Don Bosco Green Alliance.

The first two days of the global event saw the young people connecting with one another and discussing a variety of themes in a spirit of friendship and good cheer. The young economists shared their ideas on how to build a better world, through economic systems that reflect the principles and values of Saint Francis of Assisi.

The highlight of the final day was the presence of Pope Francis among the young people in Assisi.  Addressing the young economists and changemakers, Pope Francis said: “A new economy inspired by Francis of Assisi can and must become an economy of friendship with the earth and an economy of peace. It is a question of transforming an economy that kills, into an economy of life, in all its aspects.”

"There is no 'Economy of Francesco' without respect, care, and love for the poor, for every poor person, for every fragile and vulnerable person — from conception in the womb to the sick person with disabilities, to the elderly person in difficulty," the Pope told the young people.

The global event closed with the signing of the Economy of Francesco Covenant, which was also signed by Pope Francis. This closing declaration, which consists of twelve specific principles, begins by stating: “We, young economists, entrepreneurs, and changemakers, called here to Assisi from every part of the world, aware of the responsibility that rests on our generation, commit ourselves today, individually and all collectively to spending our lives so that the economy of today and tomorrow become an economy of the Gospel."

Describing her experience at the Global Event, Leann D’Souza said: “This event was an excellent opportunity for us young people to share our experiences and ideas that can help create an economy that is just and sustainable. This prophetic movement can bring to life many creative solutions, that are deeply rooted in our Christian faith.”

“Spending these days with young people from different countries, who speak different languages, and have very different cultures, taught me a very important truth: despite our many differences, we young people have the same goal, building a future that is peaceful, fair and sustainable," said Denzil Prato from the Don Bosco Green Alliance.