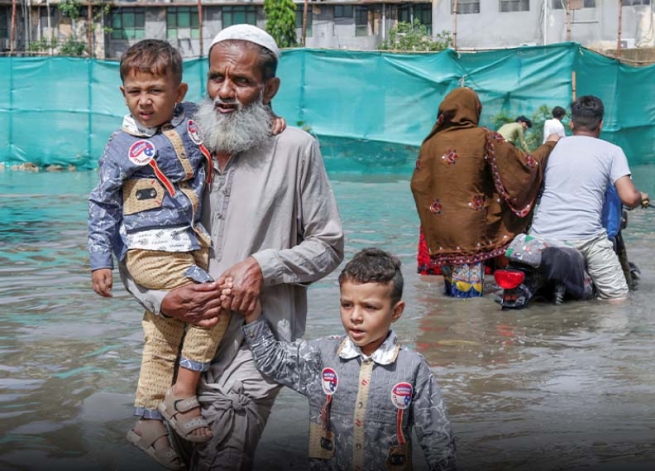 (ANS - Lahore) - Monsoon rains, this year of particular intensity and duration, combined with melting glaciers in the Himalayas and the widespread presence of garbage clogging the sewers have generated a deadly situation in Pakistan for thousands of people, who have lost everything they had to flooding. Nearly half the country was flooded. The Salesians have offered their cooperation from the beginning; the presence in Lahore was not affected, but from the house in Quetta, several aid projects were started to help the population most damaged by this calamity.

"The worst floods in the country's history," Pakistani Prime Minister Shehbaz Sharif called it. More than 33 million people have been affected, while more than 1,500 have been killed. The tragic figures are completed with nearly two million homes and 80,000 hectares of farmland destroyed, as well as 800,000 livestock killed.

The Pakistani government has declared 66 districts in the country affected. About six million people are in urgent need of assistance; some of them are already living in camps set up specifically for displaced people, but there are many problems: too little food and poor sanitation.

Even the World Health Organization (WHO) has warned of a "potential second disaster of disease and death" after the floods. Water supplies have been disrupted, forcing many people to drink unsafe water, which can spread cholera and other diarrheal diseases. "Stagnant water allows mosquitoes to breed and spread diseases such as malaria and dengue," health authorities explain.

Many families continue to be in need of food, shelter, and medical care. "In addition, having lost so many livestock, which were part of their daily livelihood, their difficulties are enormous," explained Br. Piero Ramello, SDB, a Salesian coadjutor active in Lahore. The symbol of the disaster is the Indus River, which flows in the Northern Province of Sindh, fed by dozens of rivers and mountain streams that have broken their banks due to exceptional rainfall as well as melting glaciers. The floodgates of the main dam were opened to cope with a flow of more than 600,000 cubic meters of water per second.

The "Don Bosco" Educational Society has received many requests for help from parishes, communities, families and Don Bosco alumni. The Salesian Delegation of Pakistan, belonging to the Province of the Southern Philippines (FIS), has planned a project for the Don Bosco Colony in Jacobabad, benefiting 56 families; in Sukkher, for 40 families; and in the Zahid area, for 42 more families.

For its part, "Misiones Salesianas," the Salesian Mission Office in Madrid, has already sent an initial shipment of several thousand euros to meet the emergency. The aid is expected to reach 138 families and nearly 1,000 people, almost half of whom are under the age of 15. The young "Don Bosco Past Pupils Association" in Lahore is also participating in the operation. The immediate and urgent aid consists of tents, weather protection kits, food rations, medicines, blankets, water canisters, kitchen items, and soap.

Over the past 20 years, the Salesians of Don Bosco in Pakistan have offered a great deal of help in various traumatic circumstances: they assisted the local people when they were affected by the 2005, 2008 and 2010 earthquakes with emergency aid - food, shelter, and medicine - and by helping in the construction of new houses and schools, in Baluchistan and Sindh Provinces; they helped flood victims in the Sindh region (2012); and they gave humanitarian assistance during the Covid-19 pandemic.