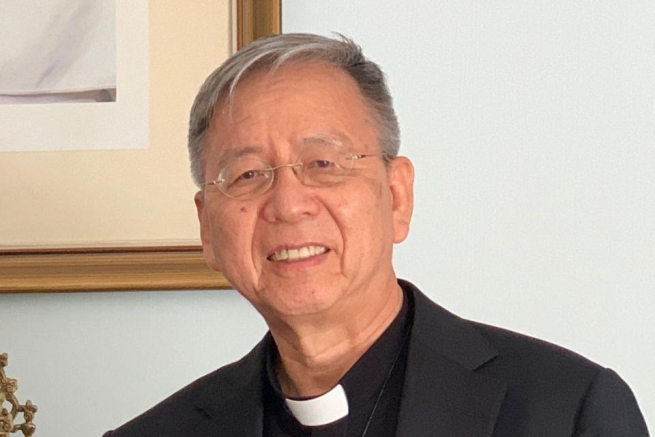 Archbishop Savio Hon Tai-Fai is an atypical nuncio, having not followed the traditional diplomatic curriculum. A Salesian, while nuncios are traditionally called by diocesan clergy, he was born in 1950 in Hong Kong and took his religious vows in 1975 for the "Mary Help of Christians" Province (CIN) comprising Salesian presences in Hong Kong, Macau, and Taïwan.

Ordained a priest in 1982, he received a bachelor's degree in Philosophy from the University of London and a doctorate in Theology from the Salesian Pontifical University in Rome; he was responsible for translating the Catechism of the Catholic Church into Chinese, and served as Professor of Theology at Holy Spirit Seminary in Hong Kong.

He became a member of the International Theological Commission in 2004, and was thus noticed by then Cardinal Ratzinger, who later as Pope Benedict XVI ordained him bishop in 2010, and assigned him to the Congregation for the Evangelization of Peoples - the Vatican body that until last June was overseeing mission lands - in which Msgr. Hon Tai-Fai worked as Secretary, serving first Cardinal Ivan Dias and then Cardinal Fernando Filoni.

In 2016, Archbishop Hon Tai-Fai served as Apostolic Administrator of the Archdiocese of Agana in the island state of Guam, and the following year he was appointed apostolic nuncio to Greece, his first assignment in the diplomatic service. This past year he was also one of the organizers of Pope Francis' visit to Greece (December 2021).

As Apostolic Nuncio in Malta, Archbishop Hon Tai-Fai will represent the Holy Father and the Holy See both vis-à-vis the Catholic Church in Malta and Gozo and the civil authorities, and it will be his task to take care of strengthening the bonds of communion between the Apostolic See and the Catholic Church present in the country. He will also serve as the Dean of the Diplomatic Corps accredited to the Republic of Malta.

Malta, with a population of about 500,000, is a land traditionally marked by the Catholic faith. Prominent Maltese clergy figures are present in the Vatican, including Cardinal Mario Grech, Secretary General of the Synod. The Apostolic Nunciature in Malta had been vacant since the resignation, for reasons of age, of the previous Nuncio, Archbishop Alessandro d'Errico, accepted on April 30, 2022. The Apostolic Nuncio in Malta is also traditionally accredited in Libya, but this second accreditation has not yet been made official.