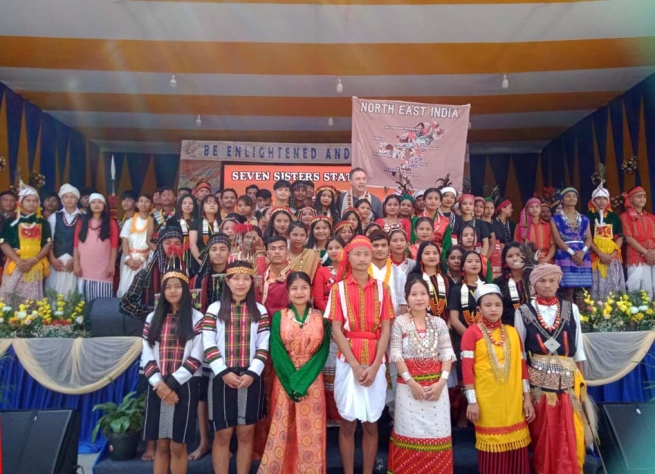 (ANS – Shillong) – On 28 October 2022, the second day of Rector Major Fr. Ángel Fernández Artime’s trip in the province of St. John Paul II, Shillong (INS), he visited the cradle of Salesian life, the Novitiate at Sunnyside Upper Shillong. The head of the Salesian Family was accorded a hearty welcome by his very own priests and novices.

Fr. V T Jose, the Novice Master, formally welcomed him to the community which was followed by the celebration of the Holy Eucharist. In his homily, Fr. Angel recalled the presence of Mary even before the Salesian; from the fact that the statue of Mary Help of Christian preceded the first Salesian missionaries to Northeast, which to date is being kept in Sunnyside itself. Keeping the target group in focus, the Rector Major reminded the young novices and the community to have as their primary goal – union with God. For, he said, communion with God brings value to works. Without connection with God, one cannot do any good, he further added. The Rector Major appreciated the novices in these words, “You look elegant and do not be afraid”, and invited them to follow Jesus who has called them. He also cautioned them if they look for comfort and power, then they are mistakenly on the wrong path.

In their words of gratitude to the Rector Major, voiced out by novice Shembhalang Lyngdoh Marshillong who said that all of them are happy to be the sons of Don Bosco. He also testified that they receive profound Salesian formation from their formators, which helps them to become genuine persons, good Christians and honest citizens. The community also assured their continuous support of prayers for the mission of the Rector Major and his council members.

“Since 1955, the novitiate of Sunnyside continues to be a cradle that nurtures the vocation of Salesian priests and brothers to continue the Salesian mission started by the first missionaries who came to Northeast India way back in 1922,” explained Sr. Euginia Laloo and Mr. O. L. Marbaniang.

Then, in his visit to the Visitation Sister of Don Bosco (VSDB) Generalate at Madonna Convent, Nongkseh Upper Shillong, the Rector Major inaugurated the museum dedicated to their founder Late Archbishop Hubert D’ Rosario SDB; this was followed by a lively discussion.

In the presence of a sizeable number of the VSDB and the novices, the Rector Major inaugurated and blessed the Hubert D’ Rosario Museum. It is noteworthy to mention that this is a maiden visit of the head of the Salesian family to the Sisters at their newly constructed Generalate. Following this, the Superior General, Sr. Mabel Dhar, gave words of welcome. The most significant highlight of the visit was the question-and-answer session in which the Sisters posed some questions relevant to their mission to the Rector Major. During the session, they expressed their desire to respond to the social issues that challenge the youth of today and to help them be spiritually oriented. They also enquired if their charism of evangelization and catechesis through family visits was relevant in Italy, the mother house of the Salesian Family. Apart from this, a Powerpoint presentation of the Congregation was screened and they also presented their future dreams namely the initiation of the Diocesan process for the Cause of their Founder, to become a pontifical Congregation, and to mobilize sponsorship for higher studies/training of the Sisters, both secular and ecclesiastical.

The Visitation Sisters of Don Bosco received its Salesian Family Membership in 2012 through a decree dated 24 January 2012 during the tenure of the 9th successor of Don Bosco, Fr. Pascual Chávez.

Then the Rector Major has reached “H. Elias” Memorial Higher Secondary School in Nongthymmai, Shillong, a Don Bosco Institution took the opportune moment of celebrating its Golden Jubilee during the celebration of the Centenary Celebration of the existence of the Salesians in Northeast India on 28 October 2022.

In this important milestone, the Rector Major garlanded the bust of Late Fr. Hopewell Elias Sohliya, a renowned Khasi poet and writer to whose honour the school is dedicated to and a commemorative slab was also unveiled. In his talk the Rector Major invited the Salesians, the members of the Salesian Family, the staff and students of the school to carry forward the dream of Don Bosco. Then he delivered a beautiful song.

The school also honoured all the former Principals and Vice Principals, retired teachers of the school, the former parish priests of Divine Saviour Parish, Nongthymmai and all dignitaries present on the occasion with a memento specially prepared for the Golden Jubilee of the school.

“H. Elias Higher Secondary School” in its endeavours to cater to the poorest section of the society opened its morning section school since its inception in 1972. In these present days it has emerged as an institution which takes great interest in the integral formation of its recipients and they have excelled in sports and games and created a record by winning the 59th Subroto Cup Football tournament U-17 Boys in 2019.

The congregations that exhibited their charism and ministry included the Daughters of Mary Help of Christians (FMA), the Missionary Sisters of Mary Help of Christians and the Visitation Sisters of Don Bosco. The associations of Salesian Co-operators, the FMA Past-pupils Federation, Don Bosco Youth Educational Services, Dimapur province and the Savio Juniorate Apostolic School were others who displayed their activities.