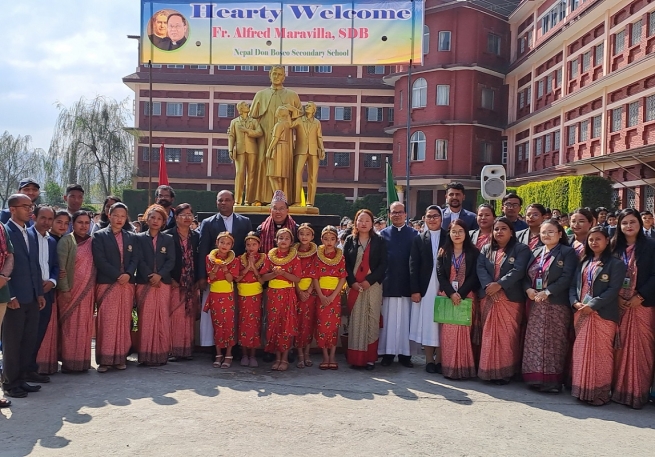 (ANS - Kathmandu) - After participating in the centenary celebrations in north-east India, Fr. Alfred Maravilla, General Councilor for the Missions, went to Nepal from 1 to 5 November, accompanied by Fr. George Menamparampil.

The current Nepalese Constitution guarantees every citizen the "right to profess, practice and preserve their religion as it has been handed down to them from ancient times". Although Nepal is no longer an officially Hindu state, most of the Christian persecutions in Nepal come from radical Hindu groups who want the country to return to Hinduism. Christians converted from Hinduism face considerable pressure from their families and communities. Fr. Maravilla was able to meet some of these new Catholic families.

In May 2006, Nepal was declared a secular state, although proselytizing remains illegal. Despite the decrease in violence, daily life remains difficult for Christians, especially converts from Hinduism.

Catholic missionaries arrived in Nepal in the 18th century, but missionaries were not allowed to enter the country from 1810 to 1950. The Catholic Mission was established in 1983, in a territory once belonging to the diocese of Patna, in India, and entrusted to the care of the Jesuits. In 2007 it was elevated to the rank of Apostolic Vicariate.

As part of his visit, Fr. Maravilla visited all eight Salesian presences in Nepal and the two communities of the Daughters of Mary Help of Christians. He also participated in two meetings with the confreres, held respectively in Biratnagar and Kathmandu, to analyze the challenges, opportunities, and the way forward to further develop the Salesian presence in Nepal. Also present during the visit were Fr. Joseph Pauria, Superior of the Salesian Province of Calcutta (INC), and the Provincial Economer.

Exactly thirty years ago the first Salesians opened a presence in Dharan, at the behest of the then-Rector Major, Fr. Vecchi. Fr Maravilla's visit was thus an opportunity to dream of the future of Salesian Nepal.