Spain – Collaboration one breathes in the project "Incubators save lives" 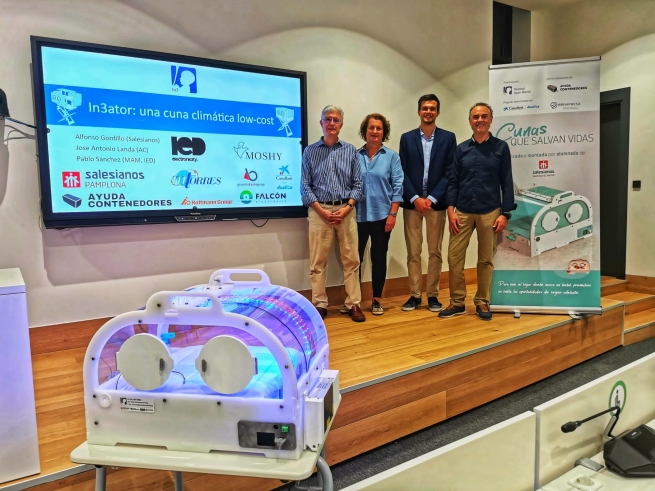 (ANS - Pamplona) - The Salesian-driven project for the construction of incubators - "Cunas que salvan vidas" (Incubators that save lives) - which just a few days ago won the first prize of the "Learning-Service 2022," in the "Development Cooperation" section, is a clear example of a successful result of collaboration between schools, organizations, and businesses.

A few days before the awarding of the prize, on October 17, and as a starting point for the project in this new school year, the team leading it - composed of the Salesians of Pamplona and the NGOs "Medicina Abierta al Mundo" and "Ayuda Contenedores" - organized a day to hand over the 50th incubator to the NGO "Ambala." It was a symbolic act, certainly, but also a very real one: this is an incubator that is already at its destination to fulfill its mission of saving lives.

"We want it to be a moment to express our gratitude and to continue to grow," the Pamplona Salesians said at the occasion.

Present at the handover of the 50th incubator were several NGOs and collaborating companies, such as "MTorres," which donated some of the 3-D elements used to build the cradles; "Moshy," which donated bed sheets; "Hoffman Group," which donates cutting tools; "Falcon," which manufactures electronic boards for the cradles; "Asesoría Zabala," which financially supports the project; and "CaixaBank," which is responsible for the "Dualiza e FP Empresa" initiative and supported this initiative during the past academic year.

"The delivery of this incubator is an act of gratitude to all the people, entities, and companies that are making this project a reality and is also the starting point for the new academic year 2022-2023, in which this team will continue to work with renewed energy," explained the Sons of Don Bosco.

There are currently 8 Salesian centers participating in the project and more are about to be added in a collaborative effort that started from the propelling center, the Salesians of Pamplona, with the "TECH Don Bosco" Institute of the "St. James Major" Province. Students and teachers from schools in the communities of Asturias, Castile and León, La Rioja, Madrid, Basque Country, and Navarre have been deeply committed to the proposal initially created by the NGO "Medicina Abierta al mundo" and have managed to combine educational innovation and social volunteerism.

"Everything we have done, in the classrooms and laboratories and with the collaborating agencies and companies, would be useless without the unconditional dedication of the organizations that receive the incubators and use them on site. Always in difficult and complex situations. They are the ones who, with their good work, transform the use of the incubators on a daily basis into miracles, not even that small...," commented the leaders of this initiative.

The "Cunas que salvan vidas" project took its first steps in 2020 in the Salesians of Pamplona. It was then extended to the participation of other vocational training centers in the Province of St. James Major in the 2021-22 school year. The handover of the 50th cradle marked the beginning of the new academic year, in which additional collaborations and support were achieved. During this school year, between 50 and 70 cradles are expected to be produced among all participating centers.