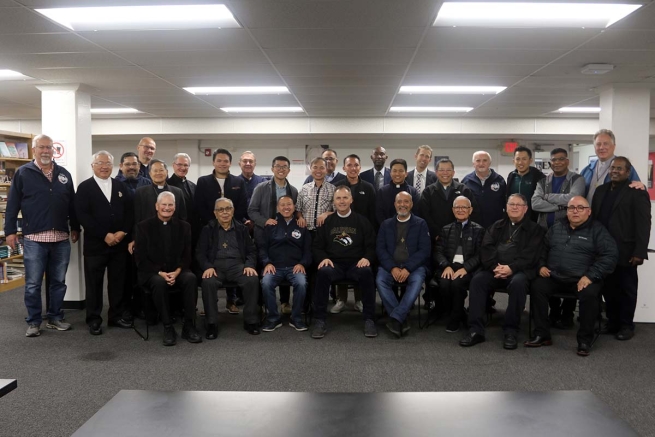 (ANS – Berkeley) – Intense, with meetings and appointments, the visit of the Rector Major, Fr. Ángel Fernández Artime, to the "St. Andrew" Province of the Western United States (SUO) continues. On Friday, November 18, the 10th Successor of Don Bosco visited the community of the Daughters of Mary Help of Christians at Bellflower, before beginning the second part of his visit to Northern California, with stops in Berkeley and Richmond.

The St. Dominic Savio community of Salesian Sisters in Bellflower, Los Angeles, welcomed Fr. Angel into their home for an intimate Mass. Also joining them were the Salesian Sisters from the Community of St. Thomas the Apostle and the Postulants.  The Salesian Sisters and Postulants were delighted to be able to celebrate the Eucharist with Fr. Ángel, Fr. Hugo Orozco (Interamerican Regional), and Fr. Mike Gergen (Pastor). After Mass, they walked to St. Dominic Savio Church to greet the school community as well as the other groups present in the Los Angeles region.

The teachers and students presented the Rector Major with gifts, as well as songs prepared by the Marian Club, Green Team (recycling team), Choir, and Student Council. After the school presentation a representative from ADMA-Y (ADMA Youth) from the St. Dominic Savio Church and some catechists from St. Thomas the Apostle Church, shared stories and info about their mission ministries in the Los Angeles region.

Soon after, the Provincial Fr. Mel Trinidad accompanied Fr. Angel and Fr. Hugo on a flight from Los Angeles to Oakland, California, to begin the Rector Major's visit to northern California Salesian communities and works. From the Oakland Airport, they traveled by BART (public electric train) to the city of Berkeley.

During his short visit to the Salesian community in Berkeley, Fr. Joe Boenzi and Fr. Alejandro Rodriguez (professors and staff) presented to the Rector Major an ongoing formation program proposal for the benefit of the Inter-American region of the Congregation and the Rector Major affirmed his support for Don Bosco Hall in Berkeley.

The next stop for the evening was a visit to Salesian College Preparatory in Richmond, California. The visit began with a brief prayer service at the Salesian Cemetery where Fr. Raphael Piperni was buried. Fr. Piperni was the leader of the first group of Salesian missionaries to arrive in the United States 125 years ago. The small crowd gathered for a beautiful dinner thereafter and was treated to some incredible performances by the student Jazz band and, of course, the Rector Major himself. Student representatives also presented the Rector Major with some gifts.

After dinner, Fr. Ángel gathered with the Salesian brothers and priests for a private meeting in the school library to express his fraternal words of affirmation and encouragement, and some continuing updates on the Congregation.