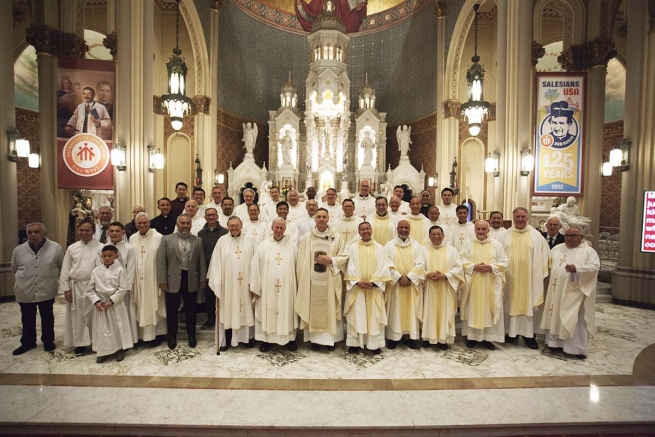 (ANS – San Francisco) – After the many trips and appointments of the first days, Rector Major Fr. Ángel Fernández Artime had a lighter schedule on the fifth day of his visit to the United States West (SUO); he spent Saturday, Nov. 19, entirely in the San Francisco Bay Area. Always important and significant were the day's events, chief among which was the celebration of the Mass of Thanksgiving for the 125th anniversary of Salesian presence in the country.

He spent some time with the Provincial and his Council and encouraged them in their continuing service to the Province, Congregation, and the Church. He expressed his joy in seeing that the Salesians are serving a very diverse group of people in the province. The question of sending additional Salesian Missionaries to serve the growing needs of the diverse groups of young people and their families in the western United States was also proposed to the Rector Major. After the meeting, the Provincial and his Council took the Rector Major and the Regional, Fr. Hugo Orozco, to a Chinese restaurant in San Francisco's Chinatown for lunch to continue their fraternal time together.

Later in the evening at Saints Peter and Paul Church in San Francisco, the Rector Major Don Ángel presided at the Mass commemorating the 125th Anniversary of the arrival of the first Salesian Missionaries to the United States (1897-2022). Also joining the celebration was Provincial Fr. Tim Zak of the Eastern Province of the United States. In the Rector Major's homily, he began by recalling briefly the humble beginnings of the Salesian presence in the U.S., that the Salesians were originally sent to serve Italian immigrants and that the Salesians continue to work with all immigrant families to this day. He continued with some of his heartfelt impressions:

During the Mass, Salesian Jubilarians, along with the rest of the Salesian brothers and priests, renewed their vows.  The St. Francis High School student choir sang beautifully, helping all present to enter into and maintain a prayerful atmosphere during the celebration. Pastor Fr. Tho Bui represented the provincial by thanking all involved in the organization of the celebration and invited everyone to a dinner reception in the parish hall. The reception hall welcomed over 400 guests with an abundance of food and drinks to celebrate the 125th Anniversary and to honor all the Salesian Jubilarians.