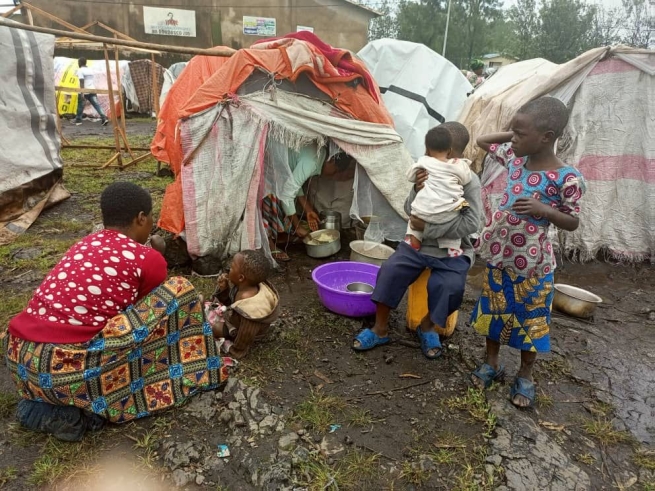 (ANS - Goma) - The situation in the East of the Democratic Republic of Congo (DRC), and in particular near Goma, continues to remain critical; since November 8, several hundred families, estimated at several thousand people, from the northern city of Goma, have occupied all the play areas around the Salesian center "Don Bosco Ngangi."

As told by the Fides news agency, since the end of last year one of the rebel groups in the area has taken up arms again; last June, it took over Bunagana, on the border with Uganda, and, after several weeks of calm, went on the offensive on October 20, extending the territory under its control. Because of this, thousands of people - men, women, children, and the elderly - have begun to flee the region’s most dangerous areas to try to save themselves.

The situation has worsened in recent days as the frontline has moved closer to Goma. There are reports of 40,000 internally displaced people in the DRC. Uhuru Kenyatta, former President of Kenya and African Union envoy as a facilitator for negotiations between the belligerents, after visiting the IDP camp, pleaded at a press conference, "First we stop the war, then we start a dialogue. We cannot make children, mothers, and the elderly live like animals. We don't say: first we talk. No, first we stop the war."

Fr. Guillermo Basañes, Provincial Superior of the Salesians of Central Africa (AFC), in a circular addressed to his confreres, offered some guidelines: "Be close, especially to the most vulnerable: children, infants, the sick, the elderly. Let no hate speech come out of our mouths, not even by insinuation. The Lord has placed us, here and today, to bear witness to the Gospel of reconciliation, of forgiveness, and love for enemies. This is precisely our 'weakness'-strength. Spare no words to strongly denounce the evil of this war and the criminal irresponsibility of its perpetrators, as well as of those who passively watch it. The Pope's words on the war in Ukraine apply perfectly here: 'War is in itself an error and a horror! A terrible and inconceivable wound of humanity (...) How much more blood will have to be shed to make us understand that war is never a solution, but only destruction? (...) Please let the younger generations breathe the healthy air of peace and not the polluted air of war which is folly!'"

"Please pray and have them pray for our benefactors," Fr. Basañes concludes, finally, while from various Salesian presences throughout the country, as well as from various Mission Offices and international Salesian bodies, there are also renewed appeals to share and bring attention to the sad reality of this war that has been "forgotten" by too many media outlets and to pressure civil society and public decision-makers to ask governments to speak and act for peace in the Great Lakes region.