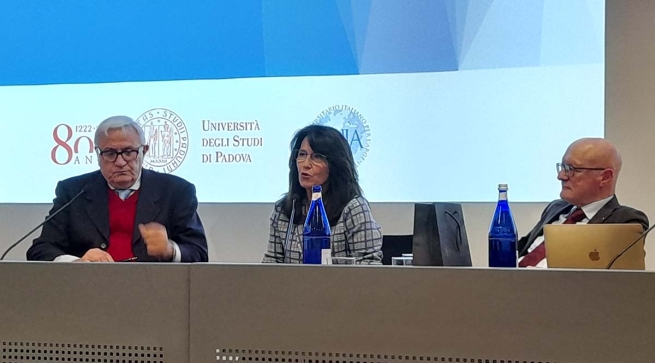 (ANS - Padua) - An entire section of the two study days of the Italy for Argentina University Consortium (CUIA) was dedicated to the figure and work of Fr. Alberto M. De Agostini, Salesian, the great missionary-explorer of southern Patagonia and Tierra del Fuego. The event was held on 17-18 November 2022 in the brand-new auditorium of the University of Padua and was included among the events celebrating the 800th anniversary of the founding of the Paduan university itself.

Professor Maria Gabriella Dionisi, of the University della Tuscia of Viterbo, and Fr. Francesco Motto, SDB, of the Salesian Historical Institute (ISS), spoke. Fr. de Agostini's film "Terre Magellaniche" (1933) was also screened on the occasion, and the exhibition on Fr. De Agostini re-proposed – it had been inaugurated on April 25 at the Salesian Pontifical University in Rome as part of the international study conference, "Images of a vanished world. Fr. Alberto Maria De Agostini (1883-1960) the man, nature, art, science."

Throughout 2022, thanks to Nicola Bottiglieri's volume, "Magellano e Don Bosco intorno al mondo. La Memoria dei luoghi" (Turin, LDC 2019), the figures of Don Bosco and Fr. de Agostini were commemorated and much-appreciated in various civic venues: in Turin, in May at the International Book Fair; in Rome, in June, at the Istituto Italo-Latinoamericano; in Salerno, also in June, during the Literature Festival; again in Rome in September, within the Travel Literature Festival; and in Vicenza in October, during the celebrations of the 500th anniversary of Magellan's voyage narrated by Antonio Pigafetta of Vicenza. On that occasion, the aforementioned film "Terre magellaniche" by Fr. De Agostini, which was also presented in the pages of L'Osservatore Romano, the Vatican daily newspaper, was highly appreciated.

In short, a Don Bosco and a Don De Agostini still "present, current and meaningful" in lay cultural circles throughout Italy and beyond, 134 and 62 years respectively after their passing.