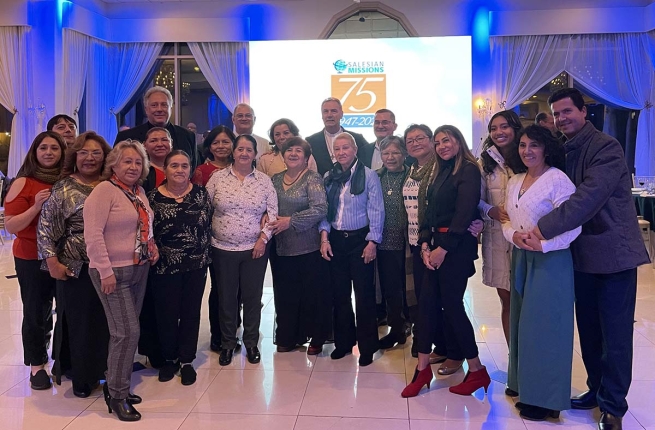 “I think it’s interesting for us being candidates and pre-novices to meet the Rector Major and treat him like Don Bosco among us,” Candidate Nathan Gonzalez exclaimed. “It’s awesome that we’re going to have a formation conference with him on Friday.”

Confreres and colleagues were treated to videos on the history and work of Salesian Missions. Additionally, Salesian Missions staff members who had over 25 years of service were recognized and honored with a gift, which was presented to them by the Rector Major. They then posed for pictures with Fr. Ángel and Fr. Tim Ploch, SDB.

Salesian Missions presented the Rector Major with a check for $2 million to be used for services that directly benefit the young. Fr. Ángel then gave a beautiful speech, which was translated by Fr. Tim.

He stated that ever since he became a Salesian, he had heard about the good works of Salesian Missions. Since becoming Rector Major, he has studied intensely what Salesian Missions does for the benefit of the Church and of the Salesian Family. He has observed that contributions to Salesian Missions reach those who are farthest away, in the most remote places served by the Congregation.

The various mission offices of the Congregation support the poorest Salesian works, found in about 73 provinces out of the 90 in the Congregation. For instance, we now have over 500 presences in Africa, including refugee camps in South Sudan, Kenya, Uganda, and Burundi. Such work can be done only with the help of generous donors. Therefore, at this Thanksgiving season, the Rector Major is happy to give thanks, heartily, to the donors of Salesian Missions.

Everyone was overjoyed to meet the Rector Major and be in his presence. “It’s been an honor and a pleasure and privilege to meet the 10th successor of Don Bosco, especially this early on in my formation,” Pre-novice Nicholas Jandernoa beamed. “It’s great to see the Rector Major as a real father figure who shows his love for us.”

Tomorrow, Fr. Ángel will spend the morning and afternoon at Salesian High School in New Rochelle before celebrating evening Mass and meeting with the Salesian Family at St. John Bosco Parish in Port Chester, NY. Then, on Thanksgiving Day, Fr. Ángel will visit the Salesian Sisters in Haledon, NJ in the morning before partaking in a Thanksgiving Day Banquet and conversing with the SDBs in Ramsey, NJ. On Friday morning, November 25, he will meet with men in initial formation and formators before heading back to Europe.

The SUE Province is grateful and overjoyed to have the Rector Major with them and asks for prayers for the remainder of Fr. Ángel’s beautiful and historical visit. A very special thanks also to everyone who made this evening a spectacular success!