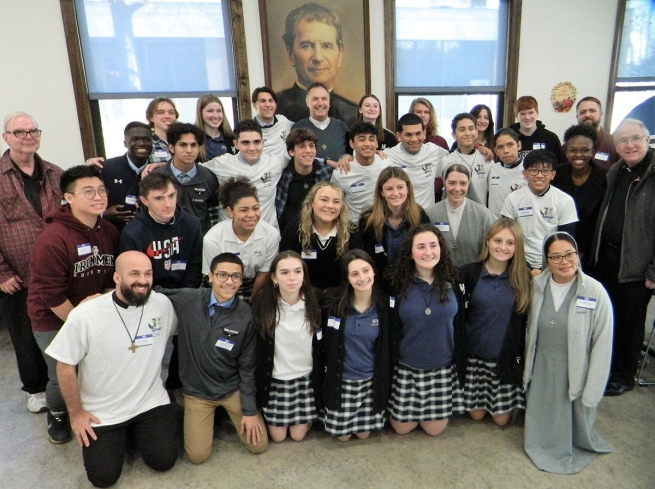 During the prayer service, Salesian High students performed a skit with reflective questions offered during various parts. A Ukrainian American sophomore and his family also presented the Rector Major with a check that he and his family, who still have relatives in Ukraine including his grandmother, raised for the young people of Ukraine.

Salesian High students then gave a litany of thanksgiving given in over a dozen languages of the school community, including Spanish, Arabic, Mandarin, Italian, and Gaelic. The litany deeply moved the Rector Major since it reminded him of the young people’s link with their families.

During his talk, Fr. Ángel spoke about the language of the heart and the importance of female educators among us. He reminded the community that, since Don Bosco worked with orphans, it was truly important to him that a mother figure be present in the lives of the young, and likened the presence of women on the school faculty to the presence of Mama Margaret at the Oratory.

Fr Ángel conveyed how he has found people in the U.S. very welcoming and accepting of various diverse cultures. He has been impressed by the fraternity and companionship in all the schools he has visited so far, which has truly filled him with joy. The Rector Major shared that Don Bosco would say, “dear young people, I believe in you, and never distance yourself from God.”

After Fr. Ángel thanked the teachers and administration in the name of Don Bosco, he took pictures with each class and took a tour of institute’s facilities. The school’s basketball team, having heard of Fr. Angel’s love for basketball, presented him with a Salesian basketball jersey, before he left the gymnasium to visit the school chapel. In the chapel, the Rector Major presided over a prayer service with the students and staff of Salesian High School, and he admired paintings of holy young people lining the walls (Savio, Polish Martyrs, Marvelli, et al.) and the paintings on the back wall that were transferred to the school from Mary Help of Christians Church in New York City (the mother work of the Salesians on the East Coast) when the archdiocese closed the parish. It was also pointed out to him that the chapel had been consecrated by Bishop Versiglia in 1926 when the future martyr-saint was staying in New Rochelle for several months.

From the chapel, he went upstairs to bless all the classrooms of the school’s new STEM center and to thank the principal donors who made it possible, and later he spoke with 40 students from Salesian High, Don Bosco Prep, and Mary Help about the Salesian Leadership Retreat (SLR) experience in the Cassin Commons.

The Rector Major had a beautiful talk with the students and gave them wonderful words of wisdom. By having illustrated the example of Aristotle and his friend and teacher, Plato, as he advised students to always stay with the truth and never give away their own integrity and personal convictions. He relayed how this is also an excellent result of their time in Salesian schools.

Don Ángel went on to express how he said “yes!” to his appointment as Rector Major. Although he at first felt fear, Fr. Ángel really wanted the good of young people in the world, which led him to say “yes!” and no longer feel fear. The Rector Major has always felt at home with all young people, and his heart has been deeply touched by being with the young people who are the poorest and living on the peripheries. This includes youth who have suffered extreme trauma (such as, but not limited to, sexual abuse, kidnapping, and imprisonment), and he shared examples of educators he has encountered who had been exposed to extreme trauma in their youth and overcame their heartbreaking ordeals to help the young today.

Fr. Ángel also shared that his faith in his youth had been marked by his family background. Having been born into a family of fishermen, the Rector Major is a teacher of fish and grew up to be a great swimmer (he also has a passionate love of basketball!). He feels a great connection to nature and loves to discover the beauty of creation, which has always made him feel in harmony with God, and the humanity of all of us is already an experience of God’s presence.

The morning ended with the exchange of the gift of music, as Fr. Ángel played two songs, one Mexican, another Spanish, and sang on the guitar. Then, led by Province Assistant Director of Youth and Young Adult Ministry Vicky Weekley on vocals and guitar, the students sang a tune that bonded them all during an SLR.