RMG – Poster of Strenna 2023 : "AS THE YEAST IN TODAY'S HUMAN FAMILY. The lay dimension in the Family of Don Bosco". 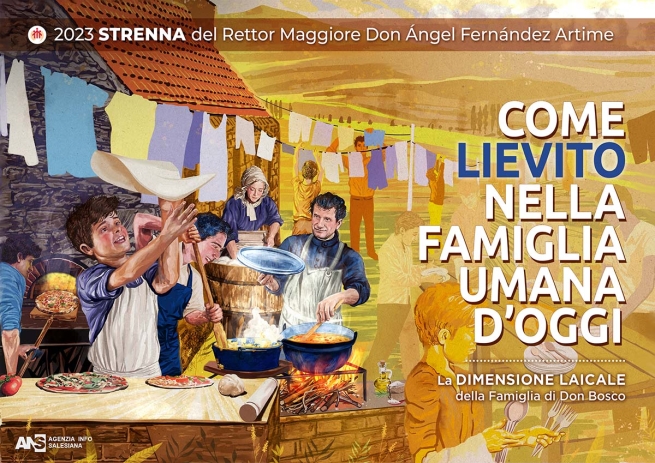 (ANS - Rome) - The two posters selected by the Rector Major, Fr Ángel Fernández Artime to illustrate the message of his Strenna for 2023: "AS THE YEAST IN TODAY’S HUMAN FAMILY. The lay dimension in the family of Don Bosco" were released today, 24 November 2022. The option of animating the Salesian Family with two different images is therefore renewed once again this year, because both are able to represent the proposed theme well, each enhancing different accents, styles and suggestions. The first of the two posters is the work of the Office of Social Communication of the "St. Anthony" Province of Portugal, and it clearly expresses the industriousness and liveliness of the Salesian Family at the service of young people all over the world, both yesterday and today.

The proposed illustration is inspired by the affection and family dimension that united Don Bosco and Mamma Margaret to the young people welcomed at the Oratory in Valdocco.

In presenting the poster, the artist Nuno Quaresma from the Communications Team of Portugal, explained the details and significance of his work of art:

“It represents, allegorically, the humble and loving courage with which, even with limited resources, a House was built, where filial connection to the founder, love and faith in God, mutual trust, fraternity and joy, were the fertile ground for a community that never stopped growing. The simplicity of the food prepared, in the foreground, and the austerity of those serving at the table, on the right of the image, evokes the miracle of the five loaves and two fishes.

In the scene, Don Bosco, Father and Teacher, leads and organizes these young people, who are his own now, who are hungry, who need a shepherd, so that they may find within themselves the gift of solidarity, of loving zeal for small tasks, of shared bread, those who need to know that they are the good yeast, that helps to grow and makes the "bread of the Human Family" greater and tastier.

The large clothing line, which blends with the landscape and background, symbolizes the many who, even if not visible, make up this huge family. Brightness floods the image, from its right side, and reminds us that everything that is deeply human is impregnated by the Divine’s light.

Both this and the other poster are available in digital format at the bottom of the page in the languages most widely spoken in the congregation; for editions in other languages, the editable file is also made available.