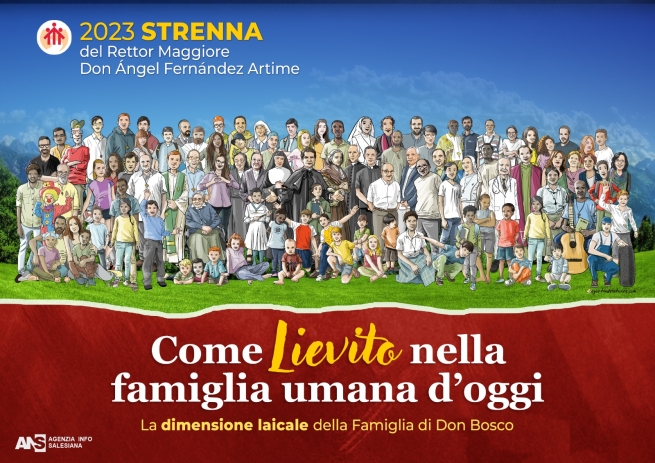 (ANS - Rome) - The second illustration for the poster of Strenna 2023 shows one hundred personages rich in details and expressions and is the work of the Spanish artist Agustín de la Torre, Salesian Cooperator and teacher. The author demonstrates a strong desire to reflect in his artistic work all the fruitfulness and extension of the Work of Don Bosco in the world, in harmony with the proposal of the Rector Major, Fr Ángel Fernández Artime, for the theme of the Strenna 2023: "AS THE YEAST IN TODAY’S HUMAN FAMILY. The lay dimension in the family of Don Bosco”.

The author explains that his composition features one hundred different personages. In the centre is Don Bosco, surrounded by some essential personages for the Salesian spirituality that are easily recognizable: Mother Mazzarello, Mamma Margaret, Dominic Savio, Blessed Michael Rua, Laura Vicuña... As well as the current Rector Major and the Mother General of the Daughters of Mary Help of Christians, and the most recent Salesian saint, Artemide Zatti.

"Everyone looks joyfully ahead - as Don Bosco used to say - and looks at the spectator who is also part of this beautiful project, of the dough that has grown, through the leaven of Salesian spirituality and the Preventive System. In the colours of everyone's clothes or skin, there is also the universality of the Salesian charism, rich in diversity, positivity, creativity and of course, the Gospel".

According to Agustin de la Torre, all the personages together fully express the motto of 'the Yeast in the human family', which has grown and continues to be nourishment for the Salesian Family today, especially when one pauses to look at the diversity of each person depicted. Another interesting feature is that affectionate look at the children, adolescents, young people, adults, men and women, missionaries and religious from all over the world who, thanks to the author's artistic zeal, are portrayed here, accompanied by various elements that express the Salesian Spirituality.

"I reiterate my joy at once again being one of the authors of the Strenna poster," concluded Agustín de la Torre, "expressing through my art my happiness and gratitude to Don Bosco.

Both this and the other poster are available in digital format at the bottom of the page in the languages most widely spoken in the congregation; for editions in other languages, the editable file is also made available.