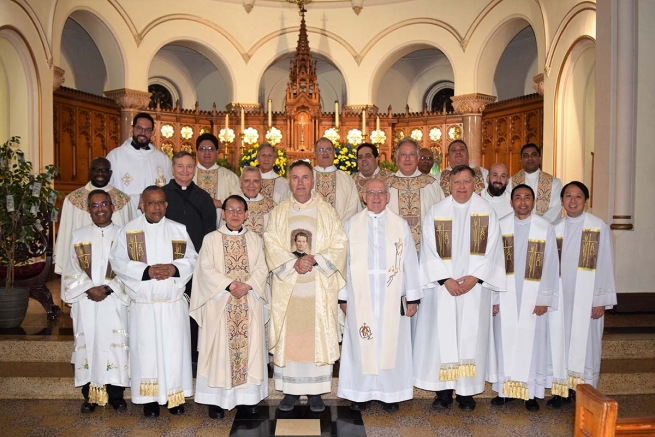 (ANS – Port Chester) – Following a meeting with the Provincial and his Council in New Rochelle on Wednesday afternoon, November 23, Fr. Ángel Fernández Artime went to the parish of St. John Bosco in Port Chester, New York, to celebrate Mass at 7:00 p.m. in honor of St. John Bosco for the Salesian Family. The parish captivated the Rector Major, and he captivated everyone in attendance.

Members of the Salesian Family from the New York metro area were invited, and some braved holiday weekend travel to come from a distance. (Thursday, November 24, is the major American national holiday of Thanksgiving.) More than 400 took part in the Eucharistic celebration—mostly parishioners including the members of ADMA, but also about 20 SDBs from New York, New Jersey, and Connecticut, 4 FMAs, numerous Cooperators from the parish and elsewhere.

As he has done in all his meetings with Salesians and young people, Fr. Ángel immediately captivated the congregation with his warmth and openness. He, in turn, was captivated by the youthfulness of some many in attendance and the parish’s diversity and vibrancy. The people participated in the Mass, almost entirely in Spanish, with enthusiasm. The readings and general intercessions were done in other parish languages: Portuguese, Polish, and English.

At the beginning of Mass, the pastor, Fr. Patrick Ángelucci, pointed out that the parish welcomes and includes people from Poland and every country in Latin America, besides native-born Americans.

Fr. Ángel opened his homily by telling the congregation that they’d have two homilies—one in Spanish, then the English translation by Fr. Timothy Zak, provincial. He stated how happy he was to be with this diverse parish community after having had good experiences at several other Salesian presences in the province of the Eastern U.S. and Canada (SUE).

He has found the Salesian charism in the U.S. to be very healthy. St. John Bosco Parish is just the latest evidence of that.

Fr. Ángel is happy to be living at the moment in Valdocco, the environment of Don Bosco, Mama Margaret, and all the early Salesians. He encouraged everyone to come and visit the beautiful city of Turin. With humor, he acknowledged that he has dared to touch the tomb of Don Bosco in spite of a posted prohibition on the casket; he is, after all, the Rector Major! He prays for Don Bosco to help him take good care of his Salesian Family.

Don Bosco’s tenth successor noted that he’s been to 100 countries in the last seven years and seen all the groups of the Salesian Family. He has seen miracles happening in Salesian houses—the miracles of lives transformed and saved.

He has especially enjoyed the diversity of the Christian community wherever he has gone. The Church’s first work was diverse, he noted; the first argument among the apostles was about diversity between Jewish and Greek believers. While we can all thank God for where we were born, now we are building something new where we are. He mentioned how impressed he was in the morning at Salesian High School when intercessions were offered in 15 languages spoken in the families of the students and staff—“and there could have been more!”

Fr. Ángel continued by invoking the Holy Father’s plea that Christians wake up the world. We begin where we are, the Rector Major said. Through our Salesian charism, we wake up bored Christians by communicating faith and kindness. We open our doors to everyone (except to keep out the cold weather!). This parish is a warm place, he said, because the hearts of its people are large.

Fr. Ángel concluded his homily by wishing the Salesian Family a living faith that sustains it and builds it up. We are, he said, a Salesian Family that transmits the joy of the Risen Lord and of our closeness to Don Bosco.

The parish made a large monetary gift to the Rector Major, presenting him with a small tree on which were clipped a good many $100 bills.

After Mass, the parish hosted a reception in the parish hall, attended by 160 people. A representative of the Salesian Family and a representative of the young adult ministry addressed Fr. Ángel, and Fr. Ángel gave a Good Night. He has seen that the parish is a parish of the poor serving the poor, and he encourages the parish to expand on that. He compared Don Bosco’s Good Nights under the portico at Valdocco to the way a family might end its day on a good, familiar note. He reminded everyone that they are experiencing Salesian family spirit, which you can learn only by being in its presence, not from any long dissertation. The Salesian Family is the largest family in the Catholic Church, laying on us a great responsibility because the Church, the young, and the poor need us. “I love you, and I carry you in my heart,” the Rector Major concluded.

On Thursday morning, Fr. Ángel departed the provincial house to visit the Salesian Sisters at their provincialate in Haledon, New Jersey, and then share Thanksgiving dinner and fellowship with about 85 local SDBs at Don Bosco Prep in Ramsey, New Jersey.