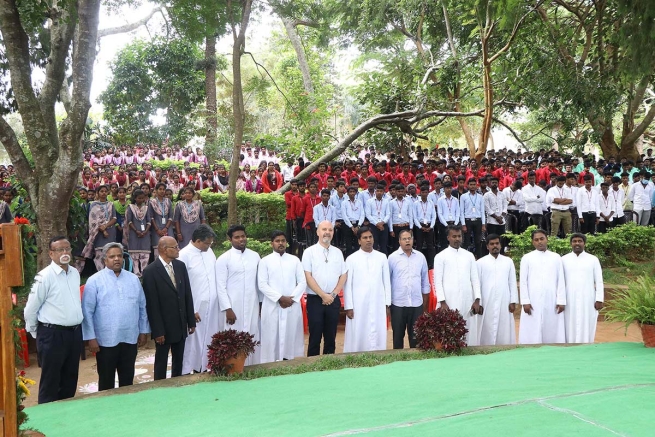 (ANS – Chennai) - The Province of Chennai, INM India had the privilege of the visit of Fr. Stefano Martoglio, the Vicar of the Rector Major from 18 – 24 November.  The six days visit was a moment of grace to the confreres and the province. It was the first visit of the Fr. Stefano to Asia/India/Chennai. During the visit the Vicar was able to visit 19 communities of the 51 of the province. He had visited all the four regions Chennai, Vellore Thiruvannamalai, Tirupattur and Pondicherry meeting the confreres of these regions and the young people who study in our institutions.

During these days of animation the Vicar General animated the Rectors and leaders of communities, the Provincial Council, the Commission for Religious Discipline and the Formation Commission. Fr. Stefano visited the two formation communities – the Novitiate and the Theologate addressing the formees and the formators separately. He also visited the three aspirantates. All the communities welcomed the vicar with warm cordiality with typical cultural expressions.

The vicar expressed his heartfelt gratitude for the hospitality, love and respect showered on him by everyone, and appreciated the province and the confreres in the name of the Rector Major for the love and esteem that is evidently present for Don Bosco and his  charism. He placed on record the praiseworthy efforts of the province for the ministry for the poor youngsters and encouraged each one to ,”Go forward always” (“Avanti sempre Avanti”)  with renewed enthusiasm as Don Bosco would do if he were to be here and now.

The confreres were very happy to meet the Vicar and were amazed by his fraternal approach and his simple personality. His insights were very sharp and clear. His love for the congregation and for the charism of Don Bosco was evident in his word and life. He thanked the province for the generosity of the province towards the congregation and appreciated the quality of service and preparation of the confreres in various fields of service for the young.

The Provicial Fr. K.M. Jose and the Vice Provincial Fr. Don Bosco organized the program of the vicar with meticulous planning, and was accompanied by Fr. John Christy, the Youth Ministry Delegate of the Province and Fr. Nallayan Pancras. On the last day Fr. Stefano Martoglio celebrated the mass at the provincial house of the FMA Salesian Sisters, Chennai concluding the Centenary celebrations of the arrival of the First missionaries of FMA to India.

Although his visit was short, it left a deep etched impression on the Vicar General and as wells in the hearts and minds of everyone in the Salesian province of Chennai.