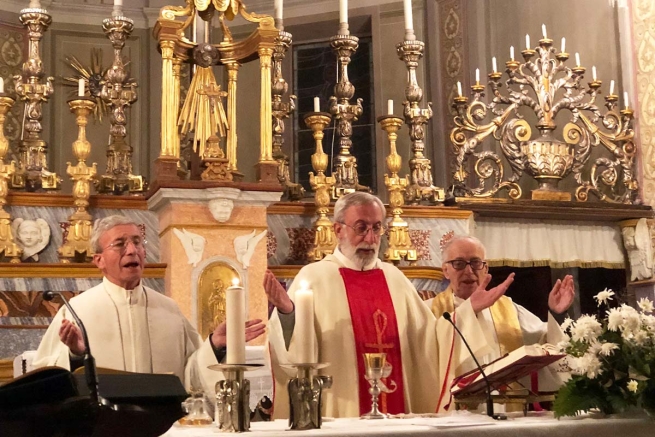 (ANS - Capriglio) - Last Friday, Nov. 25, at 9 p.m. local time (UTC+1), in memory of the Venerable Margherita Occhiena, mother of St. John Bosco, a Mass was celebrated at the parish "San Martino" in Capriglio, thus commemorating the 166th anniversary of her dies natalis in her hometown. Margaret Occhiena, known as Mamma Margaret, died in Turin, at the Valdocco Oratory, on Nov. 25, 1856, and was declared Venerable on Oct. 23, 2006.

The Eucharistic celebration was presided over by Fr. Michele Molinar, Provincial Vicar of the Salesians of Piedmont and the Aosta Valley (ICP), and concelebrated by the Director of the Salesian Work of Colle Don Bosco, Fr. Thathireddy Vijaya Bhaskar Reddy, Fr. Mario Maritano, SDB, professor emeritus of the Salesian Pontifical University (UPS), and Fr. Domenico Valsania, the diocesan vicar of the Pastoral Unit "Mamma Margherita," formed by the communities of Capriglio, Montafia, Viale and Cortazzone. The "Mamma Margherita" choir from Capriglio animated the event.

In his homily Fr. Molinar recalled how much Mamma Margherita is loved: "I myself am a fan of Mamma Margherita: she is a presence that is so dear to you and so dear to us Salesians, because mamma, mom, and dad, but mamma, above all, is the one who for nine months was one with us. She is never forgotten again and leaves a mark that is most profound. The First Reading tells us that this mark on behalf of God is called belonging. Belonging is played out between affections and bonds and even with God, especially with God, it is like this."

Subsequently, the President of the association "Friends of the Mamma Margherita Museum," Diego Occhiena, referred to the recent visit of the Holy Father Francis to Asti and the Asti area last Nov. 19-20, a family-style gathering to greet her remaining relatives in that land: just as the diocese of Asti called that appointment a "long-awaited meeting," so too Occhiena, who recalled the episode of the "long-awaited meeting" that young Margaret, around the age of seventeen, had when she went to Turin in April 1805 with her family to receive the blessing of Pope Pius VII, who was returning from Paris where he had crowned Napoleon.