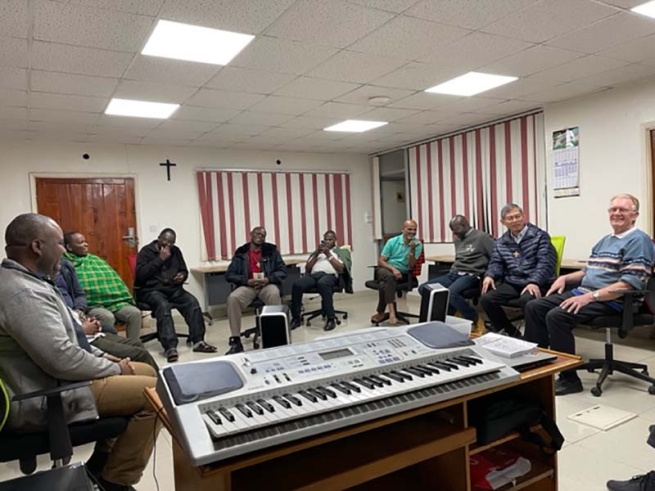 (ANS - Nairobi) - On Nov. 14-18, 2022, the Salesian Formation Center for Africa and Madagascar (SAFCAM, in English) conducted its first training workshop held at the "Don Bosco Youth Educational Service" center in Nairobi; its theme: "Salesian Pastoral Accompaniment." Planned for Salesians in the East Africa Province (AFE), the event was facilitated by Alex Mulongo and Philip Lazati, and had 11 participants.

During the first day, facilitators provided the necessary information for participants to understand the nature, relevance, and methodology of Salesian pastoral accompaniment. In addition to various documents from the Church's magisterium, such as, for example, "Pastores dabo vobis," it was important to study the contribution made by the congregation's 28th General Chapter, which offered an important stimulus to pay more attention to this topic.

Indeed, GC28 strongly emphasized that Salesians are formed "in" mission, not simply "for" mission. All Salesians were thus invited to "reflect" more on their educational and pastoral work, and to "learn" more from their apostolic experiences. Listening to their own feelings, it was also noted, challenges each one and makes mutual learning possible. And all this can help the Sons of Don Bosco to become true "Salesian pastors," able to help others from their experiences.

From the second day of formation, the participants worked both in small groups and in assembly. The main formation was primarily through concrete practice. In fact, each participant had to present a pastoral experience, positive or negative, to the group. In the group, this was not only analyzed, but also examined to discover the "heart" of that experience. In this way, participants were asked to see the "preparation" of the pastoral activity, the biblical images associated with it, the feelings that accompanied the pastoral workers in carrying it out, and the pastoral responses that arose from the experience presented.

"The training seminar on Salesian pastoral accompaniment was a success," commented the SAFCAM leaders. "Everyone was satisfied with this first experience, and this training will also be given at the Africa-Madagascar Region level, in English and later in French. This is a very important step in the Region's continuing education."