Guatemala – General Chapter of Sisters of the Resurrection 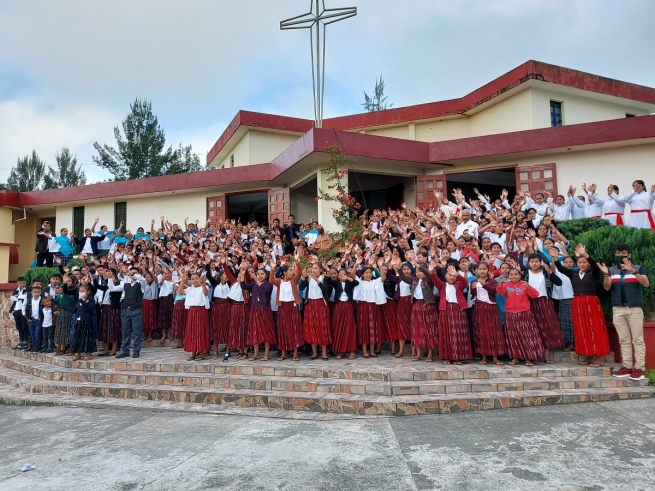 (ANS - San Pedro Carchá) - The Congregation of the Sisters of the Resurrection, XXII group of the Salesian Family, of which it has been a part since 2006, is celebrating its General Chapter these days, on the theme, "We care for the Project of God, our Father and Mother, on our Little Community."

The group, founded by Salesian Fr. George Puthenpura, an Indian originally from the state of Kerala who has been a missionary among the indigenous people of Guatemala since 1970, is currently composed of about 70 religious sisters including professed and novices, 22 of whom are participating in the Chapter.

As Fr. Puthenpura communicated, the General Chapter is meant to be an occasion to reflect and draw consequences from the consideration of "the unique Project that God has traced from eternity on us, according to his great Plan of Salvation."

The diocesan right congregation of the Sisters of the Resurrection was born out of the reality of hundreds of indigenous people who rejoiced in bringing the good news of the Gospel from village to village, despite the fact that 90 percent of them were illiterate. Girls also wanted to participate in such a mission, and that opportunity was offered to them by the arrival of the Daughters of Charity.

On September 15, 1977, nine "volunteers," living with these sisters, led by Fr. George, began an experience of community life with the prospect of making it stable, in an independent house. In the previous May, the then Salesian Provincial of Central America, Fr. Ricardo Chinchilla, had made the unexpected proposal to organize them as an indigenous religious community, telling them the procedure and providing them with the means. It was something providential.

Thus, on January 31, 1980, three young people from the group expressed their desire to form a "small community" for the purpose of serving the campesino brothers. On Jan. 31, 1987, the community was approved by Bishop Gerardo Flores Reyes, then Bishop of Verapaz, who also validated the vows of 14 sisters and admitted the first three to perpetual vows. Luisa Che became the first superior and the "Talita Kumi" center was about to become the congregation's most significant work.

That "small community" today is truly enculturated: the sisters are all indigenous, although it is not a statutory requirement. In the beginning most of them were illiterate, but that did not prevent them from transmitting a deep and heartfelt cultural richness. Their apostolate is and remains that of inculturating the Gospel and helping their poorer brethren, through catechesis and human and social promotion - especially with regard to youth and women - through literacy, education in health, family life, home economics, agropastoral and commercial activities with small cooperative micro-credit networks...

The congregation thus represents a totally new experience under the banner of its distinctive and meaningful motto: "Christ is risen, let us also rise with Him." The Easter candle has therefore become the symbol of the Community.