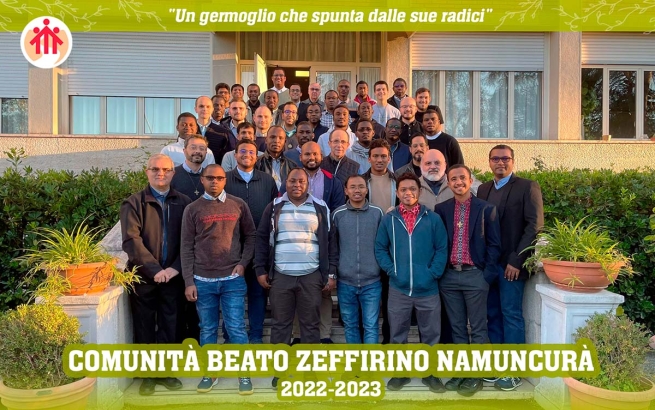 (ANS - Rome) - Between Saturday 3 and Monday 5 December the 40th Curatorium of the International Community of Theology Students "Zeffirino Namuncurá" took place in Via della Bufalotta 550, in Rome, i.e. the meeting of the Provincials who sent their confreres to this community, presided over by Fr. Ivo Coelho, General Councilor for Formation. On Saturday there was an in-person session and on Monday an online session, to give those who live in distant countries the opportunity to participate.

The fact that it was the 40th shows how there is a multi-decade journey behind this last meeting. It is a story of Salesian life which has allowed many Salesians from all Regions to carry out their specific formation towards the priesthood in this community, part of the "Mary See of Wisdom" Vice-Province, although located outside the campus of the Salesian Pontifical University (UPS).

The fortieth Curatorium was at the same time the first in the headquarters in Via della Bufalotta, while the 39th (of 4 June 2022) was still held in Via Tiburtina 994, at the Salesian Institute "Teresa Gerini". The transfer of the community to the new headquarters took place between June and September.

It was a rather adventurous exodus, passing through various unexpected bureaucratic and logistical difficulties, which however had the side effect of increasing fraternity and a sense of belonging. There was truly much manual work involved, what with the move and the arrangement of the two houses, the one left behind and the new location, by the 43 confreres who are now part of the community and by those who were still part of it until September, now destined for another assignment. The community is among the most international of the Congregation: 26 countries of origin and 22 provinces of origin.

In the presentation of the new reality at the Curatorium, the strong sense of cohesion and shared responsibility that the circumstances have helped to strengthen was especially emphasized. The young Salesians also took part in the Curatorium, through the analysis of the situation elaborated by each course, subsequently illustrated by the four representatives: Victor, Alex, Jeronimo, and Deusdedit.

“Casa Zeffirino” brings together the community of Theology Students and the Postulation. The logistical arrangement is still in progress in many respects, but there are already elements that make us foresee the huge potential that this providential conjunction between theologate and postulation brings with it. Saint Artemide Zatti kicked off this match.

The Zeffirino community was in fact totally involved in the preparation of the event and in the accompaniment of the pilgrims who came to Rome to participate in it, in particular, acting as a guide, the day before the canonization, in the most spoken languages of the Congregation, along the paths to discover of Don Bosco's Rome.

Zatti also arranged for the third mission that the Rector Major and his Council have entrusted to this community to be activated in advance so that in addition to a house of formation and postulation it is also a housing community, given the wide availability of rooms it offers. In these first months, we have been able to have many Sons of Don Bosco coming from over 30 different Provinces and from all regions, including numerous Provincials. All of this also tells us that this house is called to be at the forefront as a laboratory or workshop of Salesian interculturality and ecclesial synodality.

“As they say, 'well begun is half done'. We hope that what lies ahead of us, still in the making, will be lived with the same dedication and enthusiasm that characterized the first stages of this new beginning,” commented Fr. Silvio Roggia, Rector of the community.