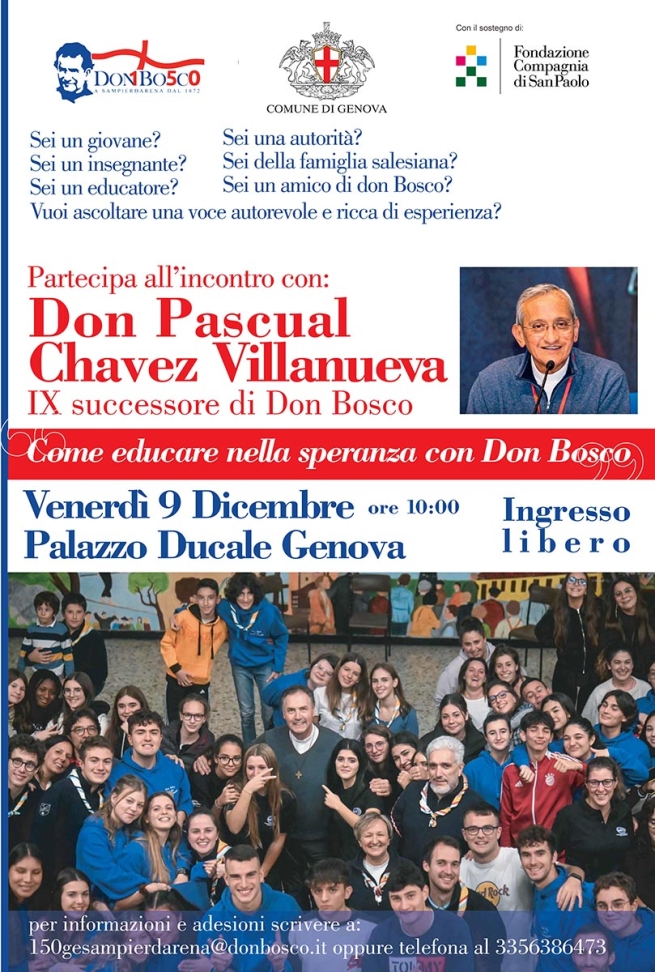 (ANS - Genoa) - The visit of Fr Pascual Chávez Villanueva, Rector Major Emeritus, to Genoa began today, Wednesday, Dec. 7. The central act of his stay in the Ligurian capital will be, on Friday, December 9, 2022, at 10:00 a.m. (UTC+1), at the Sala Maggiore of the Ducal Palace, his meeting with Salesians, educators, young people and all citizens, on the theme "How to educate in hope with Don Bosco."

Fr Chávez Villanueva, who was previously awarded an Honorary Degree in Pedagogical Sciences by the University of Genoa in 2007, is assisting in today's Immaculate Conception Spectacle, promoted by the Salesian Work of Genoa-Sampierdarena as part of its 150th anniversary celebrations. On the sidelines of this event, Rector Major Emeritus will also offer his "Salesian Goodnight" thought.

On the Solemnity of the Immaculate Conception of Mary, tomorrow, Dec. 8, at 10 a.m., he will preside over solemn Mass in the Salesian parish, during which the promises of local Salesian Cooperators will also be pronounced. The celebration will conclude with the traditional "Marian Circle."

In the afternoon, a meeting with the youth is planned, followed by the issuance of their promises by the Salesian Cooperators of Varazze. The day will be completed with an agape moment for the whole Salesian Family.

On Dec. 9, after the morning Mass at the local community of the Daughters of Mary Help of Christians, the long-awaited meeting with the city at the Ducal Palace will take place.